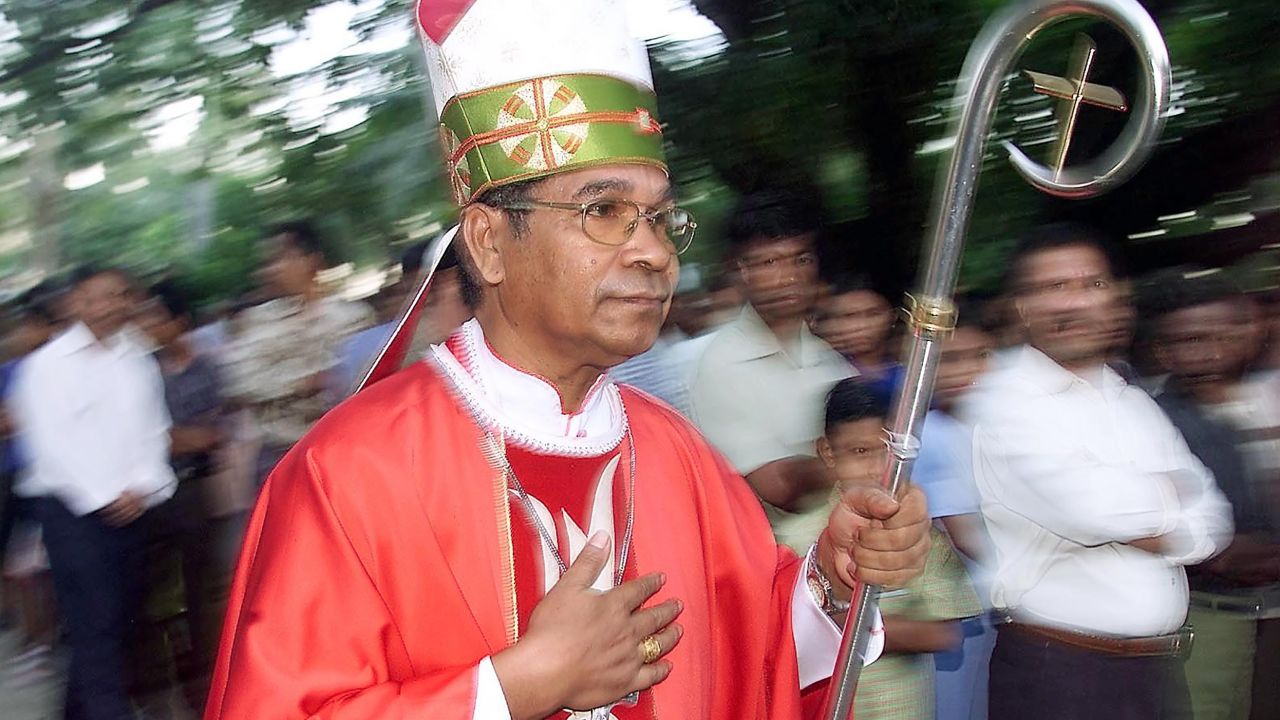 Vatican City, Sept 30:The Catholic Church’s decades-long sex abuse scandal caught up with a Nobel Peace Prize winner on Thursday, with the Vatican confirming that it had sanctioned the East Timor independence hero, Bishop Carlos Ximenes Belo, following allegations that he sexually abused boys there during the 1990s.

The Vatican admission came a day after a Dutch magazine, De Groene Amsterdammer, exposed the claims against the revered Catholic bishop, citing two of Belo’s alleged victims and reporting there were others who hadn’t come forward in East Timor, where the church wields enormous influence.

Spokesman Matteo Bruni said the Vatican office that handles sex abuse cases received allegations “concerning the bishop’s behaviour” in 2019 and within a year had imposed the restrictions.

They included limitations on Belo’s movements and his exercise of ministry, and prohibited him from having voluntary contact with minors or contact with East Timor.

In a statement, Bruni said the sanctions were “modified and reinforced” in November 2021 and that Belo had formally accepted the punishment on both occasions.

The Vatican provided no explanation, however, for why St. John Paul II allowed Belo to resign as head of the church in East Timor two decades early in 2002, and why church authorities permitted him to be sent to Mozambique, where he worked with children.

News of Belo’s behaviour sent shock waves through the heavily Catholic, impoverished Southeast Asian nation, where he is regarded as a hero for fighting to win East Timor’s independence from Indonesian rule.

“We are here also in shock to hear this news,” an official at the archdiocese of Dili in East Timor said on Thursday, speaking to The Associated Press on condition of anonymity.

Others said they would stand with Belo for his contributions to the country and its struggle for independence.

“We accept and submit to any decision issued by the Vatican on the allegation against Bishop Carlos Ximenes Belo, whether it is right or wrong,” said Gregoriu Saldanha, who chairs the November 12th Committee, a youth organisation established after a massacre at Santa Cruz during Indonesia’s occupation of East Timor.

He said at a news conference in Dili that “we will still stand with Bishop Belo, because we realise, as a human being, Belo has weaknesses or mistakes like others. If he does wrongdoing, it’s his individual fault, nothing to do with the religion”.

He added that “We cannot ignore his kindness and what he has fought for the people of East Timor. Belo is part of our struggle for independence. As a leader of the Catholic church, he has provided supports and solidarity for the people’s struggle”.

De Groene Amsterdammer said two alleged victims, identified only as Paulo and Roberto, reported being abused by Belo and said other boys were also victims.

It said its investigation showed that Belo’s abuse was known to the East Timorese government and to humanitarian and church workers.

“The bishop raped and sexually abused me that night,” Roberto was quoted as telling the magazine. “Early in the morning he sent me away. I was afraid because it was still dark. So I had to wait before I could go home. He also left money for me. That was meant so that I would keep my mouth shut. And to make sure I would come back.”

Belo won the Nobel Peace Prize in 1996 with fellow East Timorese independence icon Jose Ramos-Horta for campaigning for a fair and peaceful solution to conflict in their home country as it struggled to gain independence from Indonesia, a former Dutch colony.

The Norwegian Nobel Committee, in its citation, praised Belo’s courage in refusing to be intimidated by Indonesian forces.

The committee noted that while trying to get the United Nations to arrange a plebiscite for East Timor, he smuggled out two witnesses to a bloody 1991 massacre so they could testify to the UN human rights commission in Geneva.

The Nobel Committee declined to respond to the allegations, other than to say it generally doesn’t comment on past laureates. In a recent exception, the committee rebuked its 2019 winner, the Ethiopian prime minister, over the war and humanitarian crisis in the Tigray region.

Ramos-Horta went on to become president of East Timor, a former Portuguese colony. Upon his return on Thursday from the US, where he addressed the UN General Assembly, Ramos-Horta was asked about the allegations against Belo and deferred to the Vatican. “I prefer to await further action from the Holy See,” he said.

The United Nations called the allegations “truly shocking”, and said they must be “fully investigated”, according to a statement from UN spokesman Stephane Dujarric.

Belo, who was believed to be living in Portugal, didn’t respond when reached by telephone by Radio Renascenca, the private broadcaster of the Portuguese church.

Belo is a priest of the Salesians of Don Bosco, a Roman Catholic religious order that has long had influence at the Vatican. The Portuguese branch of the Salesians said Thursday that it learned “with great sadness and astonishment” of the news.

The branch distanced itself from Belo, saying he hadn’t been linked to the order since he took charge in East Timor. However, Belo is still a Salesian bishop, listed in the Vatican yearbook by his Salesian initials “SDB” at the end of his name.

“As regards issues covered in the news, we have no knowledge that would allow us to comment,” the Salesian statement said.

It said the Portuguese Salesians took in Belo at the request of their superiors after he left East Timor in 2002 and because he was highly regarded, but said he had done no pastoral work in Portugal.

The Dutch magazine said its research indicated that Belo also abused boys in the 1980s before he became a bishop when he worked at an education centre run by the Salesians.

Paulo, now 42, told the Dutch magazine he was abused once by Belo at the bishop’s residence in East Timor’s capital, Dili. He asked to remain anonymous “for the privacy and safety of himself and his family”, the magazine said.

“I thought: This is disgusting. I won’t go there any more,” the magazine quoted him as saying.

Roberto, who also asked to remain anonymous, said he was abused more often, starting when he was about 14 after a religious celebration in his hometown.

Roberto later moved to Dili, where the alleged abuse continued at the bishop’s residence, the Dutch magazine reported.

It is unclear whether or when any alleged victims ever came forward to local church, law enforcement or Vatican authorities.

St. John Paul II accepted Belo’s resignation as apostolic administrator of Dili on November 26, 2002, when he was 54.

The Vatican announcement at the time cited canon law that allows bishops under the normal retirement age of 75 to retire for health reasons or for some other “grave” reasons that make them unable to continue.

In 2005, Belo told UCANews, a Catholic news agency, that he resigned because of stress and poor health. Belo had no other episcopal career after that, and Groene Amsterdammer said he moved to Mozambique and worked as a priest there.

Belo told UCANews he moved to Mozambique after consulting with the head of the Vatican’s missionary office, Cardinal Cresenzio Sepe, and agreed to work there for a year and expected to return to East Timor.

“I do pastoral work by teaching catechism to children, giving retreats to young people. I have descended from the top to the bottom,” UCANews quoted Belo as saying.

Efforts to reach Sepe, who is now retired, were not successful.

By 2002, when Belo retired as head of the church in East Timor, the sex abuse scandal had just exploded publicly in the US and the Vatican had just begun to crack down on abusive priests, requiring all cases of abuse to be sent to the Vatican for review.

Bishops, however, were exempted from that requirement. Only in 2019 did Pope Francis pass a church law requiring all sexual misconduct against bishops to be reported internally, and providing a mechanism to investigate the claims, suggesting the new law triggered the Vatican to take action in Belo’s case.

It is possible that Belo’s sexual activity with teens was dismissed by the Vatican in the early 2000s if it involved 16- or 17-year-olds, since the Vatican in those years considered such activity to be sinful but consensual. Only in 2010 did the Vatican raise the age of consent to 18.

Belo is not the only church official in East Timor accused of abuse. A defrocked American priest, Richard Daschbach, was found guilty last year by a Dili court of sexually abusing orphaned and disadvantaged young girls under his care and was sentenced to 12 years in prison, the first such case of its kind in the country. (AP)