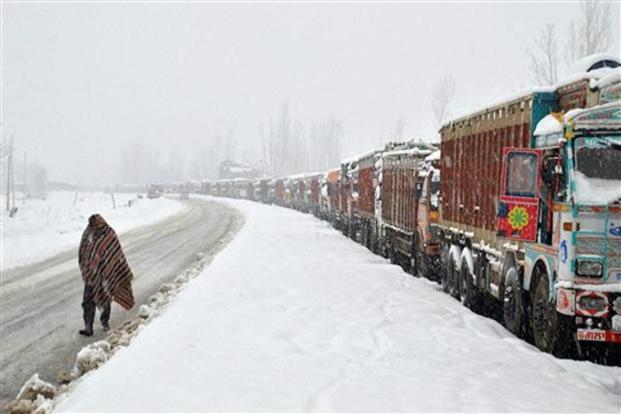 Fayaz Bukhari
SRINAGAR, Feb 11: As Jammu-Srinagar National Highway (NH-44) remained closed for 6th consecutive day today due to landslides in Ramban sector, Kashmir valley is facing crisis of essentials with prices skyrocketing.
The residents in South Kashmir’s districts said that the petrol pumps have run dry in the area. They said that diesel is available but for last two days, the pumps have run out of petrol. However, in Srinagar the petrol and diesel were still available but won’t last for more than couple of days.
The Liquified Petrol Gas (LPG) of Indian Oil and Bharat Petroleum is out of stock as these two companies have no bottling plant in the Valley. Jagmohan Raina, one of the leading distributors of the Indian Oil LPG said that for last four days they are out of stock due to closure of the highway. “The IO normally distributes 8, 000 cylinders daily but these days we are having no stocks”, he said.
The residents in South Kashmir said that even HP gas is not available in the area but in Srinagar and North Kashmir the LPG is still available but if the road is not re-opened in few days the stocks of the HP will also exhaust. Normally around 20, 000 cylinders are distributed in Kashmir valley daily but these days only one fourth is available.
As per the Mutton Dealers Association there is no mutton available as the road this winter remained mostly closed. However, wherever the mutton is available, it is being sold at exhorbitant rates. Ghulam Mohammad, a resident of Srinagar said that he got mutton at Rs 550 per kilogramme when the Government rate is only Rs 420 per kilomgramme.
The chicken is also out of stock and wherever it is available it is being sold Rs 170 per kilogramme when last week the rate was Rs 120 per kilogramme. The eggs are being sold at Rs 70 per dozen.
The vegetables and fresh fruits are also out of stocks and people are mostly banking upon the pulses and dried vegetables. The spinach (Kashmiri saag) is being sold at Rs 100 per kilogramme.
The closure of the highway has also led to shortage of some emergency and essential drugs in Kashmir. The chemists said that they are facing scarcity of vital medicines for diseases like hypertension, diabetes, cancer and thyroid.
Abdul Hamid, a Chemist said that situation is getting worse every day as main distributors say that they are out of stock due to closure of the highway and cancellation of flights. Drugs used during surgeries and as anaesthesia are also short in supply. He said that shortage of anti-cancer and chemotherapy drugs like Mitoxantrone has left patients and their families in distress.
Some drugs cannot be stored for more than 24 hours as they need a dedicated cold chain to keep up efficacy and ingredients. The closure of the highway, chemists said, makes this almost impossible during winters.
Another Chemist Sajjad Ahmad said that drugs used to combat hypertension, insulin, oral hypoglycaemic agents and anti-hypertensive drugs used for controlling blood sugar and high blood pressure are running out of stock.
Divisional Commissioner Kashmir, Baseer Khan, today chaired an emergency meeting of officers and pharma dealers to review the stock and supply position of essential and emergency drugs. He took strong note of the shortage of some vital drugs in Kashmir markets. He directed the chemists and druggists to maintain enough stock of all medicines so that there will be no shortage of essential drugs in the market.
Khan had earlier directed all petrol stations to limit the sale of petrol to three litres a day per vehicle, while diesel was restricted to 10 litres. He had also asked to maintain separate stock for Government vehicles. He had formed market checking squads to check black marketing.
With the closure of the highway, the air tickets are sold at exhorbitant rates. Srinagar-Jammu air tickets costs Rs 15000-16000 while Srinagar-Delhi is above Rs 20, 000. Government has failed to prevent skyrocketing of airfare as airlines are calling shots.