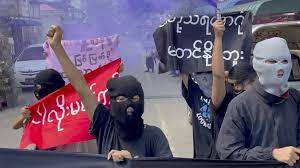 Washington, July 26: The US has urged China to increase its pressure upon Myanmar after the military junta executed four democracy activists, BBC reported on Tuesday.
State Department spokesperson Ned Price said China had the influence over Myanmar more than any other country and hence it should put pressure upon it in this regard. However, a Chinese foreign ministry spokesman , Zhao Lijian said China does not interfere in other countries’ internal affairs adding that Myanmar should use its laws and constitution to resolve its internal differences.
Price said however, there could be “no business as usual” with the junta regime in Myanmar, also known as Burma, and called on all countries to ban sales of military equipment to the country and “refrain from lending the regime any degree of international credibility”. He further said the US was considering “all options” to cut off the regime’s revenue.
Activist Kyaw Min Yu, better known as Ko Jimmy, and former lawmaker Phyo Zeya Thaw were among those executed by the Myanmar junta. The activists were arrested after an army-led coup last year and accused of committing “terror acts” and were sentenced to death in a closed-door trial that rights groups criticised as being unjust.
Both Phyo Zeya Thaw and Ko Jimmy lost their appeals against their sentences in June. Less is known about the two other activists – Hla Myo Aung and Aung Thura Zaw.
They were sentenced to death for killing a woman who was an alleged informer for the junta. (UNI)