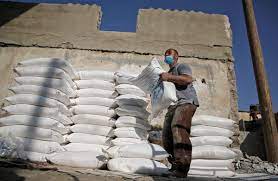 JERUSALEM, July 26: The UN agency dedicated to helping Palestinian refugees has expressed “deep appreciation” for India’s contribution of USD 2.5 million that will go directly to serve the schools, health centres and other basic services run by the organisation to support them.
Sunil Kumar, Director of the West Asia and North Africa (WANA) Division at the Ministry of External Affairs, presented the cheque of India’s contribution to the officials of the UN Relief and Works Agency for Palestine Refugees in the Near East (UNRWA) in Jerusalem on Friday.
“Yes we received on Friday the first half (USD 2.5 million) of the annual contribution of India (total USD 5 million) for which we are very grateful. The Indian contribution helps support the main (core) budget of UNRWA — which means that the funds will go directly to our schools, health centres and other basic services to Palestine refugees,” Tamara Alrifai, UNRWA’s spokesperson, told PTI.
“Since 2018, the Government of India has given UNRWA 20 million US dollars,” she added.
Karim Amer, Director of Partnerships at the Department of External Relations of UNRWA, said the “timely contribution” was a strong demonstration of India’s unwavering support for the work of UNRWA and commitment to the well-being of Palestine refugees.
“On behalf of UNRWA, I would like to express our deep appreciation for the Government of India for its continued funding to the Agency and its backing of Palestine refugees across the Middle East,” Amer said.
“It is thanks to the consistent support of donors like the Government of India that the Agency is able to provide vital services to Palestine refugees across the Middle East in the face of its continuing challenges. India did not forget us even during the pandemic,” another senior official, who has served the organisation for several years, told PTI.
During an Extraordinary Virtual Ministerial Pledging Conference for UNRWA held on June 23, 2020, Minister of State for External Affairs V Muraleedharan had announced that India would contribute USD 10 million to UNRWA over the next two years.
UNRWA is facing an increased demand for services resulting from a growth in the number of registered Palestine refugees, the extent of their vulnerability and their deepening poverty.
It is a United Nations agency established by the General Assembly in 1949 and mandated to provide assistance and protection to some 5.6 million Palestine refugees registered with UNRWA across its five fields of operation.
Its mission is to help Palestine refugees in Jordan, Lebanon, Syria, West Bank, including East Jerusalem and the Gaza Strip, achieve their full human development potential, pending a just and lasting solution to their plight.
UNRWA services encompass education, health care, relief and social services, camp infrastructure and improvement, protection, and microfinance among Palestinian refugees.
During Prime Minister Narendra Modi’s visit to Palestine, the first by an Indian premier, in February 2018, India increased its annual financial contribution four-fold to the UNRWA core budget, from USD 1.25 million to USD 5 million.
India has also made a strong appeal to other traditional donors of UNRWA to consider enhancing their contributions as well as to non-donor member states to consider contributing to the agency in solidarity with the Palestine refugees. (PTI)