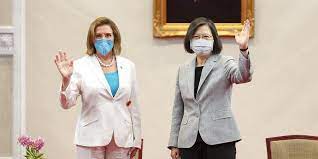 Beijing, Aug 18: The US Government has announced talks with Taiwan on a trade treaty in a new sign of support for the self-ruled island democracy claimed by China’s ruling Communist Party as part of its territory.
The announcement on Thursday comes after Beijing held military drills that included firing missiles into the seas around Taiwan in an attempt to intimidate the island after a visit by US House Speaker Nancy Pelosi, the highest-level member of the US Government to visit Taiwan in 25 years.
Thursday’s announcement by the US Trade Representative made no mention of tension with Beijing but said the negotiations were meant to enhance trade and regulatory cooperation, a step that would entail closer official interaction.
The United States has no official relations with Taiwan but maintains extensive informal contacts through the unofficial American Institute in Taiwan. Washington is obligated by federal law to see that the island has the means to defend itself.
Taiwan and China split in 1949. The island never has been part of the People’s Republic of China, but the Communist Party says it is obligated to rejoin the mainland, by force if necessary.
The talks also will cover agriculture, labour, the environment, digital technology, the status of state-owned enterprises and “non-market policies,” the USTR said. (AP)