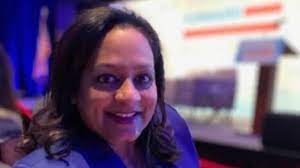 Washington, Jun 17: The US Senate has confirmed Indian-American water issues expert Radhika Fox as head of the Environmental Protection Agency’s Office of Water.
The Senate, bitterly divided on party lines, confirmed Fox’s nomination on Wednesday by 55 to 43 votes after seven Republican Senators supported her candidature. Two Democratic Senators did not cast their votes.
“Ms Fox brings with her an impressive professional record of service and accomplishment, spanning over two decades, working on water issues at the local, state and federal level,” Senator Tom Carper, Chairman of the Senate Committee on Environment and Public Works (EPW), said.
“We have the opportunity today to confirm a truly gifted leader and put her to work serving our country right away,” he added.
On April 14, President Joe Biden nominated Fox for the post of Assistant Administrator for Water, Environmental Protection Agency.
Fox currently serves as the Acting Assistant Administer for Water. The EPA’s Office of Water works to ensure that drinking water is safe, waste water is safely returned to the environment, and surface waters are properly managed and protected.
Prior to joining EPA, Fox served as the Chief Executive Officer for the US Water Alliance, where she established herself as a widely recognised national thought leader on complex water issues, from equitable water management to investing in the nation’s water infrastructure.
Her work has helped address the most salient water issues facing the US — including climate change, affordability, equity, governance, innovative finance and the evolution of the One Water movement.
Fox previously directed the policy and government affairs agenda for the San Francisco Public Utilities Commission, which is responsible for providing 24×7 water, waste water and municipal power services to 2.6 million Bay Area residents.
She also served as the Federal Policy Director at PolicyLink, where she coordinated the organisation’s policy agenda on a wide range of issues, including infrastructure investment, transportation, sustainable communities, economic inclusion, and workforce development.
Fox holds a Bachelors of Arts degree from Columbia University and a Masters in City and Regional Planning from the University of California at Berkeley where she was a HUD Community Development Fellow.
The seven Republicans who supported Fox’s nomination are Susan Collins, Lindsey Graham, Cindy Hyde-Smith, Roger Wicker, Richard Burr, Kevin Cramer and Lisa Murkowski.
Republican Senator Shelley Moore Capito opposed the nomination of Fox to be the Assistant Administrator for the Office of Water
“Throughout her nomination process, when I asked Ms Fox about the administration’s plans, she expressed a desire to hear from stakeholders in order to create a ‘durable’ rule,” she said.
The Senator said Fox did not conduct any formal, public stakeholder process before announcing the decision that was made to repeal the Navigable Waters Protection Rule.
“The administration has said it plans to repeal the rule – then put in place guidance from the 1980s – while we wait and while they come up with a replacement,” Capito said.
“Changing the regulations three times in a short period of time — 2015, 2020, and now 2021 — simply does not meet her commitment to develop a ‘durable’ definition. Instead, ever-changing rules create a game of regulatory ping pong across administrations,” she added. (PTI)