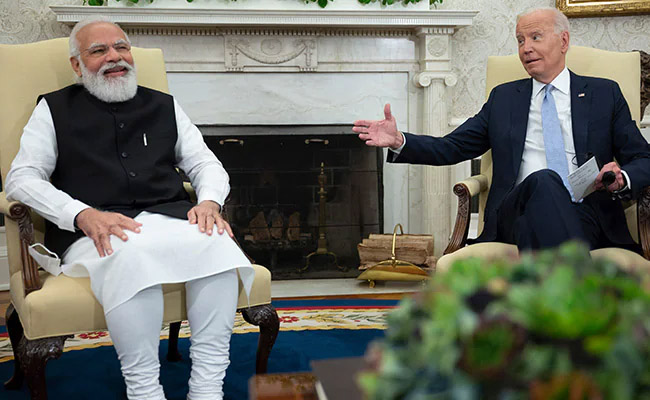 New Delhi, Sept 24: US President Joe Biden, meeting with Prime Minister Narendra Modi this evening at the White House for their first bilateral since his election, joked about “five Bidens in India” and a Biden who “married an Indian woman”, raising much laughter during their joint press meet.
In the same vein, PM Modi “informed” him he had come with documents that could help him in his quest for Bidens in India.
“I am not sure but when I was elected (as senator) as a 28-year-old kid in 1972, before I was sworn in, I got a letter from a person named Biden in Mumbai. I said I couldn’t follow it up…The next day in the press conference, the Indian press said there are five Bidens in India,” President Biden said, apparently going off script.
PM Modi laughed at the remarks.
The US President continued, “…I said jokingly that I found out there’s a Captain George Biden who was captain in the east Indian tea company…”
Clarifying that it was all in good humour, he joked: “The end result was that he (George Biden) apparently stayed and married an Indian woman. And I have never been able to track it down… so the whole purpose of this meeting is to help me figure this out…” As he turned to PM Modi mock-seriously, there were more laughs in the room.
“Jokes aside, the relationship between India and the US, the largest democracies in the world, is destined to be stronger, closer, tighter.”
PM Modi, taking Biden’s cue, said he had brought genealogy papers along for the US President.
“You talked about Biden surnames. You had mentioned it to me earlier too. I tried to hunt for the documents and I have come with some documents. Maybe those documents can be of some use,” said the Prime Minister, drawing hearty chuckles from President Biden, who quipped: “I’m relieved.”
In other remarks before their meeting, President Biden said he had long believed that the US-India relationship could help solve many global challenges. “In fact, back in 2006, I had said that by 2020 India and the US will be among the closest nations in the world,” he said.
President Biden has often joked about “distant relatives in Mumbai”. He referred to it when he visited the city in 2013 and even urged “some genealogist in the audience” to “follow it up”. Mr Biden reiterated his claim two years later at an event in Washington, saying there are five Bidens living in Mumbai. (Agencies)