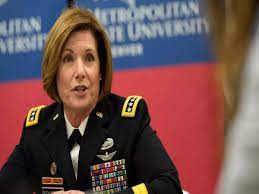 Denver, Dec 18:US military Southern Command Gen. Laura Richardson is focused on strengthening military relationships with South American countries despite fraught politics, she said a little more than a month after taking on the role.
Richardson, the highest ranking female in the U.S. Army, was in Denver to speak at a graduation ceremony at her alma mater, Metropolitan State University. She said that while the politics between the U.S. And South American nations might not be what “we would want …. The military relationships are really strong,” Richardson said in a media roundtable Friday.
Richardson referenced an example in El Salvador where U.S. Political relationships are souring. In November, Jean Manes, the interim chargé d’affaires in El Salvador announced she was leaving her post and said the government of President Nayib Bukele “is showing no interest” in improving the bilateral relationship.
Manes departure was preceded by the Bukele government pulling out of an anti-corruption agreement with the Organization of American States and their refusal to extradite members of the MS-13 gang to the U.S. For trial.
Earlier this year, the U.S. Government also published lists of allegedly corrupt officials in Central America which included Bukele’s Chief of Staff Carolina Recinos.
Meanwhile, Richardson said the U.S.-El Salvador security partnership remains strong, adding that she recently called the Minister of National Defense René Francis Merino Monroy to offer condolences for his son who died as a pilot in an aircraft accident. The U.S. Also sent a helicopter unit from Honduras to aid with search and rescue, she said.
Richardson noted that 23 countries came to the Southern Command’s October change of command ceremony where she was officially given her position as head of the agency.
“That was really tremendous to have that many come and represent because they want to partner with us,” she said. “They want to do the exercises. They want to work with us as much as possible.”
Since assuming the position, Richardson traveled to Colombia and Brazil. She recalled her father in her hometown of Northglenn, Colorado, asking how far she was and what time zone she was in.
“I wonder how many other people are like my father and don’t realize how close things are,” she said. “Because those are our neighbors,.”
As the new agency head, Richardson said she’s thinking about how to maintain relationships with nations large and small “so we never leave anybody … Untouched or feeling like we’re not partnering with them.”
Richardson said the work of Southern Command is increasingly related to humanitarian response due to climate change disasters like hurricanes or earthquakes. They’re also dealing with heightened illicit drug trades— noting that metric tons of cocaine intercepted by the U.S. “more than doubled” between 2019 and 2020.
As a woman who broke through numerous glass ceilings in the military, Richardson said she strives to represent her demographic and make them proud and quipped, “you can get in there and hook and jab with the rest of them.” (AGENCIES)