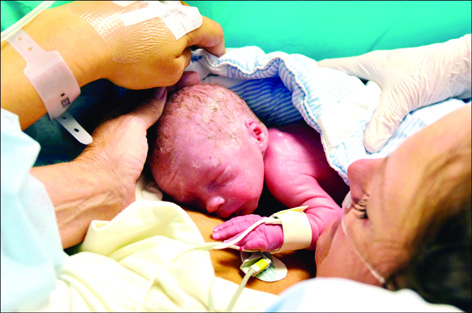 Dr. Richa Sharma, Dr Amit Basnotra
This is an update of latest advances       in science in the domain of Infertility and Reproductive Medicine.It may come as a blessing for many provided it stands the test of time.Many of our readers may have heard of this term ” Uterine Transplantation” via media  and word of mouth.
We will discuss various aspects and the probabilities of the same.variable reactions and So far its showingGood news is that its being started in India also in Pune and Bangalore.It may if successful become a research procedure to an authenticated treatment with proven efficacy.Definitely its early to comment on its future as its in infancy stage.
Introduction
The uterine transplant is the surgical procedure whereby a healthy uterus is transplanted into an organism of which the uterus is absent or diseased which normally does not allow embryonic implantation,  making  female absolutely infertile. This phenomenon is known as absolute uterine factor infertility (AUFI). Uterine transplant is a potential treatment for this form of infertility.
What it is exactly and how it is followed ?
Uterine transplantation starts with the uterus retrieval surgery on the donor followed by a complex surgery on the recipient.
Stages- The recipient has to look at potentially three major surgeries-
* Transplantation surgery
* If a pregnancy is established and carried to viability a cesarean section is performed
* As the recipient is treated with immuno-suppressive therapy, eventually, after completion of childbearing, a hysterectomy may needs to be done so that the immuno-suppressive therapy can be terminated.
Indications- Those with absent uterus(By Birth or due to any surgery/trauma)
And even in diseased unhealthy uterus which are not suitable enough to carry pregnancy
Its still a research process though procedures are being undertaken successfully .Its definitely a breakthrough in the field of Reproductive medicine.It will prove that science has a solution for every problem with terms and conditions apply.
Journey Followed
Uterine transplantation hasnot come up as a latest procedure.It has been in trial and worked upon for years starting from the experiment on animals to final human interventions.
It all started way back in 1896  by Emil Knauer with detailed research started in 1918 in Vienna . In 1964 and 1966, Eraslan, Hamernik and Hardy, at the University of Mississippi Medical Center in Jackson, Mississippi, were the first to perform an animal (dog) autotransplantation of the uterus and subsequently deliver a pregnancy from that uterus. In 2010 Diaz-Garcia and co-workers, at Department of Obstetrics and Gynecology, University of Gothenburg in Sweden, demonstrated the world’s first successful allogenic uterus transplantation, in a rat, with healthy offspring.
Journey took its way from Germany to Saudi Arabia to Turkey To Sweden ,then USA And now in our own country also with variable results with few cases of live births also though the details were not disclosed clearly.
In Sweden in 2012, the first mother-to-daughte womb transplant was done by Swedish doctors at Sahlgrenska University Hospital at Gothenburg University led by Mats Brännström.
The first uterine transplant performed in the United States took place on 24 February 2016 at the Cleveland Clinic The transplant failed due to a complication on 8 March and the uterus was removed. In April it was disclosed that a yeast infection by Candida albicans had caused damage to the local artery compromising the blood support of the uterus and necessitating its removal.
The first uterine transplant performed in India took place on 18 May 2017 at the Galaxy Care Hospital in Pune, Maharashtra. The 26-year old patient had been born without a uterus, and received her mother’s womb in the transplant.
Criteria
The criteria set conditions for the recipient, the donor, and the health care team, specifically:
* The recipient is a genetic female with no medical contraindications to transplantation, has uterine absence that has failed other therapy, has “a personal or legal contraindication” to other options (surrogacy, adoption). It is asked that she wants a child, is suitable for motherhood, psychologically fit, likely to be compliant with treatment, and understand the risks of the procedure.
* The donor is a female of reproductive age with no contraindication to the procedure who has concluded her childbearing or consented donating her uterus after her death. It is asked that there is no coercion and the donor is responsible and sound to make informed decisions.
* The health care team belongs to an institution that meets Moore’s third criterion[46] regarding institutional stability and has provided informed consent to both parties. It is asked that there is no conflict of interests, and anonymity can be protected unless recipient or donor waive this right.
Conclusions
Despite remarkable advances in infertility treatment, major forms of uterine factor infertility have remained untreatable. o This success has eradicated the diagnosis of absolute uterine factor infertility. o Face, larynx, hand transplantation have also now reached the stage as established clinical procedures, after non-vital tissues or organs which after transplantation, would have the chance to substantially increase an individual’s quality of life…..
(The authors are Senior IVF Consultant Mumbai and Senior Gastroentrologist                 Delhi)