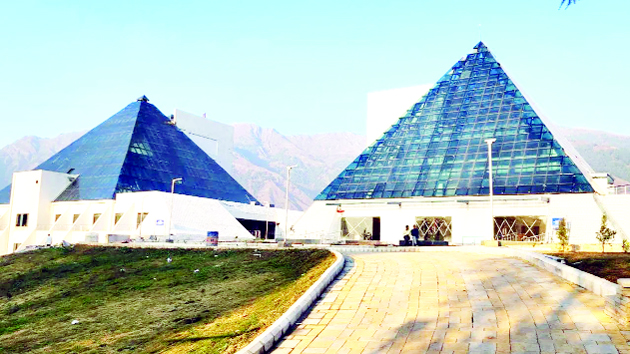 Pradyot Gupta
The Udhampur district is located in the Shivalik range of Himalayas and the terrain is mostly mountainous. The upper reaches of district experience snowfall in the winter season. Udhampur is populary known as ‘Land of Devika’ and ‘Land of Bowlis. Headquarter of district, is named after Raja Udham Singh, the eldest son of Majaraja Gulab Singh, the founder of Dogra rule in Jammu and Kashmir.The town is said to have been built at a place where Udham Singh occasionally went on hunting trips till he developed great love for the spot and choose it as site for township. Its altitude is 755 mtrs and it is an all whether destination.
Sudh Mahadev, Mantalai Temple
In Udhampur, the highly revered Shiva temple is located at a distance of 42 Kms from Patnitop and 112Kms from Jammu. Legend has it that after bathing at a spring called Gouri Kund, just short of Sudh Mahadev, the goddess Parvati would worship the shivling here that is believed to be at least 3000 years old. The temple also houses a black marble statue of Shiva and Parvati. A trishul of Lord Shiva is also preserved here. Pilgrims in large number visit the shrine on the full moon night of Sawan to participate in the festival to worship Lord Shiva. The mystical underground stream, Devak believed to be as sacred as the Ganges originates at Sudh Mahadev and disappears among the rocks some distance downstream. Also, of interest, are wooden sculptures, crafted locally. Accommodation is available in Tourist Sarai managed by J&K.
Mantalai in a Village in Chenani Tehsil in Udhampur District of Jammu and Kashmir. It is located in the tranquil lesser Himalayas, surrounded by graceful sal forests, overlooking the hillocks and the plains, below. It is the spiritual pathway to the ultimate, discovered through the union of body, mind and soul. It will not be just a retreat that will leave tourists breathless with the enchantment of its surroundings, but assists in redefining lifestyles to include the well-known traditional Indian wellness regimes of Yoga combined with best of international wellness experiences. Mantalai is located 22 Kms towards East from District head quarters Udhampur.This Place is at the border of the Udhampur district and Doda District. Dogri is the Local Language here.
Upcoming Wellness/Yoga Centre at Mantalai
The famed resort of Mantalai in Udhampur, which once housed the Ashram of late Yogi Swami Dhirendra Brahmachari, is being developed as International Yoga Centre (IYC), which will be “second to none” in the country. Situated at 130 kilometers away from Jammu, Mantalai is a picturesque resort in Udhampur. The Brahmachari had set up his ashram to teach yoga to his disciples. Swimming pools, spa, helipads, gymnasium auditoriums, and business convention centre are all planned.
With an aim to give fillip to the tourism sector in Jammu, project is coming up as a part of the ‘integrated development of tourist facilities’ project at Mantalai-Sudhmahadev-Patnitop circuit. Under the Prime Minister’s development Programme Rs. 82.17 crore have been sanctioned by the Ministry of Tourism, Government of India,
The up coming international yoga convention centre is a prestigious project which include tourist facilitation centre, dining centre/ cafeteria, eco-lodge huts with solariums integrated into cottage design, meditation enclaves in apple orchard helipad, ambulance shed, fire tender station, wind vane, open air amphi theater with green rooms sewage treatment plant, water treatment plant, battery operated cars and installation of signages. It will definitely boost economical prospects of locals and this project is expected to become popular in coming days as plans are there to attach this yoga centre in Udhampur to Vaishno Devi Shrine in Katra. The project is ready with 90 percent construction work and local youth will surely get employment and it will open a new horizon for the villagers in Chenani constitueny of udhampur district.
J&K’s biggest Yoga- Centre is all set to come up for tourists within days. Yoga is a part of life and antalai area has been famous for yoga activities sincelong. Yoga centre will give a fillip to a religious and to urist destination. A pyramid shaped mega structure is being built. Other than that, huts for tourists and meditation pods, are other few projects that are likely to be completed soon. The Yoga centre is a part of a larger project Integrated development of Tourism facility in Mantalai, Sudhmahadev and Patnitop. A cafeteria and a convention centre will also add feather to the project Land for the project was handed over in Nov, 2017 by the then State Government but due to Covid -19 crisis, project got delayed. The Yoga centre, spa area and treatment centre under the project can together have 60-70 people at any time.
The project is surely going to play an important role in uplifting socio-religious and economic condition especially of Udhampur town and J&K in the whole.
(The author is working as Assistant Labour Commissioner, Udhampur)