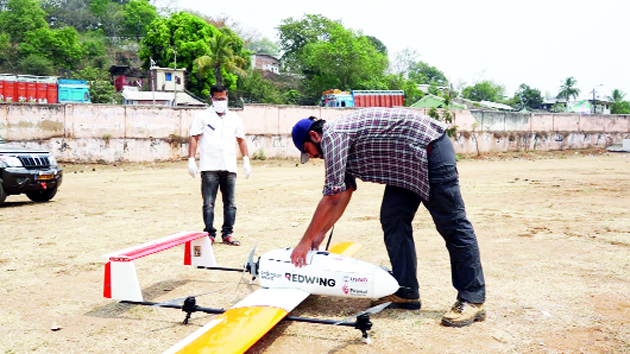 A USAID-supported drone project is helping bolster TB diagnosis in hard-to-reach areas by delivering samples quickly to laboratories for testing, reports Michael Gallant
India has the highest tuberculosis (TB) burden in the world. Combating TB has been a long-standing goal and the Government of India has set a target of eliminating TB in the country by 2025.
To help boost these efforts, an international coalition of organisations and government agencies worked together to bring a new technology to the fight against TB. In March 2022, they created a pilot programme in Odisha to test whether remote-controlled flying drones could help diagnose TB patients faster—and save lives in the process.
Roots of innovation
The concept for the drone project was simple and urgent. Local health care providers in remote areas can collect samples of sputum (thick mucus from the lungs) from people who have symptoms suggestive of TB. These samples are loaded onto drones, which quickly fly to laboratories where the samples are tested for signs of TB. Then, the local health care providers are notified of the diagnosis.
The need for innovative approaches is particularly acute in tribal areas as well as rural and hilly regions where roughly 10 percent of India’s population resides. “Tribal communities have higher prevalence of TB, and providing access to quality diagnostics and medications often becomes challenging,” says Amar N. Shah, a senior TB strategy and innovation advisor for USAID/India, which helped develop the pilot program. “The drone programme was targeted to mitigate such challenges. With this pilot, we were hopeful to diagnose more TB cases, provide early TB treatment, and cut the chain of transmission amongst tribal communities.”
Piramal Foundation, a Mumbai-based health care nonprofit organisation, played a key role in designing, developing and implementing the drone pilot programme through its special initiative, Anamaya, the Tribal Health Collaborative. Shailendra Hegde, senior vice president for public health innovations at Piramal Foundation, says that a large proportion of tribal people in India lack access to up-to-date diagnostic laboratories. This means that many people who suspect they have TB might not be able to get tested and receive the much-needed treatment. “The remoteness, hilly, uneven and forest-covered terrain of most tribal villages add to the challenges and make it even more difficult for someone to access the already-scarce diagnosis and treatment services,” he says. “Addressing this diagnostic gap is a critical step in early detection, treatment and prevention of TB disease and death.”
The drone pilot programme was created to address these problems by accelerating the diagnosis of TB by hours, days or even weeks, and dramatically increasing the patients’ chances of recovering.
International partnership
Piramal Foundation and USAID worked closely with Bengaluru-based technology company Redwing Aerospace Laboratories to make the drone project a reality, and break new ground in the process. While drones have been used earlier to deliver vital medicines to rural areas, Dr Hegde says, harnessing such technology to help with diagnoses is an exciting new frontier, and one that requires close collaboration and teamwork to implement.
“The Anamaya team within Piramal Foundation worked very closely with Redwing Labs and the district leadership of Kalahandi to design and implement the pilot programme,” says Hegde. “Anamaya looked after the end-to-end project management and coordinated with the local government to arrange necessary permits and support, while also working closely with frontline workers to ensure timely sample collection at the source location.”
During the March 2022 pilot programme, drones delivered 17 samples from Kesinga and Narla to the Bhawanipatna district hospital in Odisha to be tested. Dr. Hegde says that Redwing’s drones flew perfectly and it “showed that it is possible to transport sputum samples without any damage to the sample from a remote location to a TB unit for diagnosis.” It was equally important, he adds, that community members and health care workers showed they were open to working with drones, laying the groundwork for future expansion of the project.
For those who provide care directly to patients, the project demonstrated transformative potential. Dolomani Majhi, a lab technician based in Narla, says drone support can streamline the storage and transportation of samples by flying them directly to hospitals and avoiding the need for long periods of refrigeration.
Similarly, Chandravati Jhankar, an accredited social health activist who works with TB patients, says drone logistics can help health workers get test results within a day and inform patients faster than current procedures, which, she says, are burdened by logistical and transportation-related delays.
As drone technology continues to advance, Shah sees it becoming integral to India’s public health efforts in the years to come. “The doorstep delivery of drugs and diagnostics should become a norm” regardless of how remote or hard-to-reach certain rural areas may be, he says. (SPAN/TWF)