Kudos to Narendra Modi for passing the Citizenship Amendment Bill-2019 which finally has become a law. Political leaders cutting across political lines are up in arms against CAA. Sonia Gandhi, herself a foreigner of Italian origin, presently main leader of Indian National Congress(INC) led an all- party delegation which met the President of India against CAA. She carried the banner of “Save The Constitution” while meeting the President on this contentious issue. Not only this, Mamta Banerjee, the current CM of Bengal demanded a UN-monitored referendum on CAA. Likewise, number of writ petitions have been filed by the so-called Psuedo-secularists, intellectuals, political activists before the Hon’ble Supreme Court of India as well as High Courts across the country to create an impression that something unbelievable is going to happen after CAA in India. Spontaneous protests erupts across various cities of India, thereby, threatening the law and order, besides social fabric across the country.
Actually, there is a deep-rooted background behind the passage of this citizenship Amendment Bill-2019 and very few people are well-conservant with this background. There is a dire need to highlight the background which led to the passage of this bill which now has become a complete law.
Historical perspective is that after the partition of India in 1947 into two nations-Islamic Republic of Pakistan & India, millions of Hindus, Sikhs, Christians, Parsis, Jains, Buddhists came to India. Some came to India voluntarily while large chunk of people of these religions /faiths were compelled by the hostile circumstances to come to India. Take the example of such people of various faiths who migrated to India from Afghanistan due to gaining of stronghold by Taliban in that country. Actually, the Taliban virtually created a reign of terror especially among the minorities viz Hindus/Sikhs/Parsis/Buddhists etc by pulling down and later bombarding the famous Bamiyan Buddha Statues and later on, attacked and discriminated the Sikh traders in Afghanistan which eventually led to their immigration into India. The story of oppression /tyranny and discrimination does not end here. In Pakistan, the fundamentalists have started targeting the Hindus/Sikhs/Buddhists/Christians and others in a very systematic manner which ultimately made these oppressed minorities to move to India for safe asylum, thereby, resultantly, the overall %age of minorities shrunk to a quite low level especially in Pakistan, Bangladesh & Afghanistan. These people who have been living in India since long are striving hard to get basic facilities in India. The BJP led Govt. did a commendable job for granting them citizenship so as to enable them to enjoy the rights at par with other fellow citizens of India. Except Muslims of these countries (Pakistan, Afghanistan, Bangladesh), all the persecuted minorities viz; Hindus/Sikhs/Buddhists etc. would now enjoy the right of citizenship in India. However, the opposition parties led by Sonia Gandhi and her brigade, leftists and others have termed the CAA as discriminatory in nature primarily it denies the right of citizenship to Muslims of these countries who are neither persecuted nor deprived of any rights in their fellow countries viz Pakistan ,Bangladesh and Afghanistan etc. The fact of the matter is that the Muslims are in majority in these countries but the Political parties without bothering for the genuineness of CAA are spreading false propaganda among the Muslims to get their votes and pitch them against the BJP led Modi Govt. at centre. To some extent, they have succeeded in their nefarious designs but now, the people have started realising their gameplan to destroy the very social fabric of India and culture by generating feelings of mistrust among the fellow citizens. Another fact of the matter is that the Congress party under Manmohan Singh had also pitched for granting citizenship to these people. Now, time has come to unite and defeat the ill-designs of these power hungry politicians who can go to any extent to tarnish the image of India worldwide. Infact, CAA has nothing to do with the infringement of rights of the native Muslims. Their rights shall remain safeguarded as usual as per Indian Constitution. Further, the action of BJP Govt. in this direction through the passage of CAA should be highlighted properly for safeguarding the vital interests of India in the long run and also for putting to rest the wallowing confusion in the matter.
feedbackexcelsior@gmail.com

A Lesson for BJP

Seamy side of our Nature

Tribute to a gallant Dogra

Fight against corruption-a myth or reality

FRDI Bill Are depositors going to pay for bank failures? 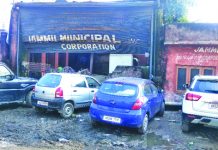