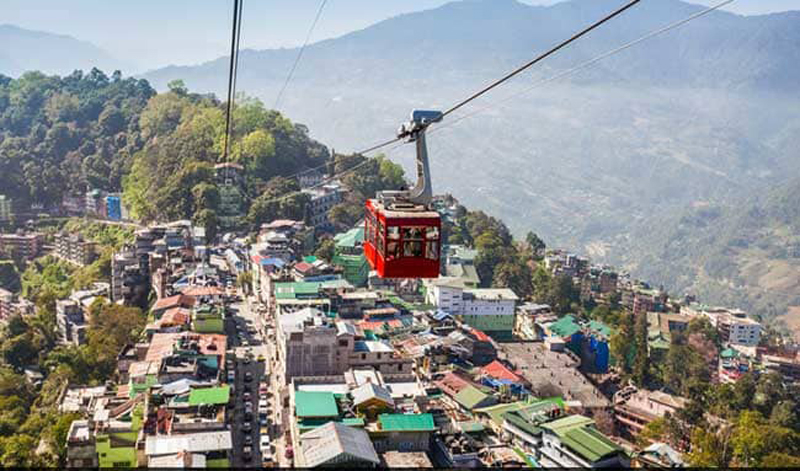 Ordered over 40 days back, magisterial enquiry yet to be completed

Mohinder Verma
JAMMU, Mar 3: Uncertainty is prevailing over the early resumption of work on the much-hyped Jammu Ropeway Project due to delay in completion of magisterial enquiry into the crash of rescue trolley which had led to the death of two persons and injuries to four others. Moreover, technical inspection of vital components of the project by a Group of Senior Engineers is also pending.
The work on maximum components of the Jammu Ropeway Project, which has the potential to attract large number of tourists as well as local population, was completed by the Damodar Ropeways and Infrastructure Limited engaged by the Jammu and Kashmir Cable Car Corporation in the month of January this year.
After successfully completing pre-commissioning trials on Bahu to Mahamaya Park Section, the company was engaged in full load trials on Peer Kho to Mahamaya Park Section when on January 20 rescue trolley crashed all of a sudden near Mahamaya Park Terminal Station leading to death of two persons and injuries to four others.
Both Damodar Ropeways and Infrastructure Limited and a company providing labourers for the project were held responsible for the loss of lives as none of the six victims was wearing safety gears at that time.
Soon after the accident, Government ordered immediate stopping of work on all the components and magisterial enquiry to ascertain the cause(s) behind the tragedy. The enquiry was assigned to the then Additional Deputy Commissioner Jammu with the direction to complete the task as expeditiously as possible.
During the course of enquiry, the officer visited the site of the accident and even obtained CCTV footage but till date enquiry has not been completed, official sources told EXCELSIOR, adding “unless enquiry is completed and report submitted to the Government work cannot be resumed as soon after the January 20 accident the Government had directed the Jammu and Kashmir Cable Car Corporation to keep the work suspended till further orders”.
“Due to suspension of work and closing of the entire site for visit by anyone other than the officer assigned the task of conducting magisterial enquiry even technical inspection of vial components of the project could not be completed till date”, sources further informed, adding “it would be only after submission of enquiry report and subsequent follow-up action by the Government that technical inspection would be resumed”.
It is pertinent to mention here that on January 7, 2019 the Government, in pursuant to Sections 10 and 11 of the J&K Aerial Ropeways Act, 2002, had constituted a Group of Senior Engineers to act as Technical Inspectors from the State Government for inspection of Jammu Ropeway Project.
The group comprising of Chief Engineer, Mechanical Engineering Department, Chief Engineer M&RE, Superintending Engineer Civil and Showkat Ahmad Bhat, Deputy Manager (Mechanical), J&K State Cable Car Corporation Gulmarg has the mandate to act as per the provisions prescribed under Sections 10 and 11 of the J&K Aerial Ropeway Act, 2002.
When contacted, Managing Director of J&K State Cable Car Corporation Shamim Ahmad said, “unless Government permits we cannot resume activities on the project although not much work is pending”.
The Enquiry Officer Pawan Katoch, the then Additional Deputy Commissioner Jammu and presently Additional Secretary, Animal and Sheep Husbandry Department, said, “we have almost completed the exercise”. However, he failed to give specific time-frame for the submission of report to the Government.
“Due to delay in completion of magisterial enquiry uncertainty is prevailing over early resumption of work on the project”, sources said, adding “at present it is not possible to specify any time-frame for completion of left-over works and dedicating the project to the people”.
It is worthwhile to mention here that the project has two sections-Section-I from Peer Kho to Mahamaya Park having length of 1184 meters and Section-II from Bahu to Mahamaya Park having length of 484 meters. While there is no tower on Bahu to Mahamaya Park there are seven towers between Peer Kho to Mahamaya Park.
The J&K Cable Car Corporation has proposed 22 cabins on Peer Kho to Mahamaya Park section and eight on Bahu to Mahamaya Park with each having capacity to carry six persons at a time.