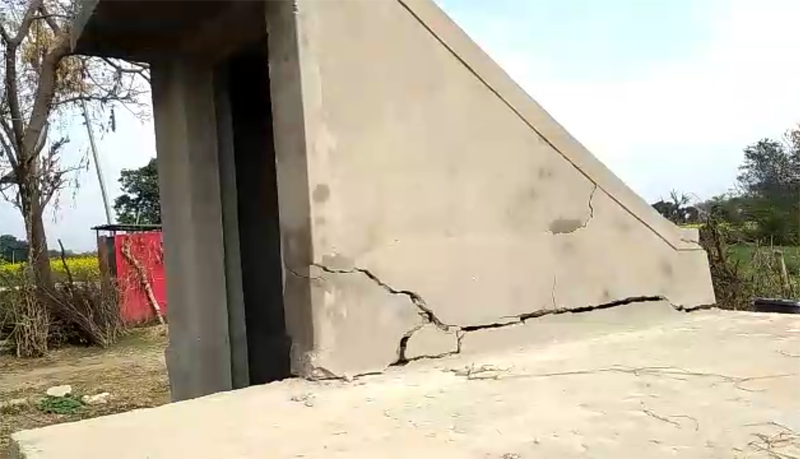 Avtar Bhat
SAMBA, Mar 3: Cracks have surfaced in some bunkers in border belt of Samba district, which are in constructional stage as yet thereby generating a lot of resentment among the border dwellers.
As per reports, the cracks in some bunkers have surfaced in village Sadda Chak in Rajpura area of Samba district where even the seepage water has also entered into some bunkers.
The people while expressing their resentment alleged that the bunkers constructed by PWD in their area are not up to the mark. They said when the bunkers will develop cracks in normal times even before their handing over to people how they can be safe when there is shelling from across the border.
The villagers Ganesh Kumar and Raj Rani while showing their grave concern over the developing of cracks in some bunkers at construction stage and entering of water into them, expressed apprehension that these bunkers can be safe and secure for them in the event of shelling from across the border. They said they will even collapse with the bang of a heavy mortar shell in the vicinity of such bunkers.

Click here to watch video
“This way, the Government was exposing us to grave risk”, they said adding “we don’t see any fun of constructing these bunkers which will not be durable and stable”.
“The Government is not concerned about our security and safety but for benefitting the contractors and officials who have not taken pains in maintaining the quality of work”, alleged villagers and they also warned to launch an agitation against the authorities who have taken the hapless border people for granted.
The villagers said that some bunkers are filled with rain water and some of them have developed cracks. The villagers said that the tension prevailed between both the countries. They said they required the bunker in such circumstances which could save and protect their lives. But the bunkers are not of that standard and durable which they doubt can withstand the shelling from across.
“This way the Government is putting our lives to grave risk”, said Ganesh Kumar. “We can escape the Pakistan shelling but taking refuge in these bunkers can prove fatal for us”, he added.
The villagers also alleged that the bunkers are not properly designed as no proper attention was paid while designing them to stop rain water from entering inside the bunkers.
“These bunkers have been designed in such a way by the engineers that there is no provision of stopping rain water from entering them and some of the bunkers in the area are filled with rain water”, alleged Kumar.
The villagers demanded that the matter be investigated at highest level. They also demanded that the design of bunkers be changed.
However, when contacted the Executive Engineer, R&B Samba, Rajesh Bhagat said that individual bunker of Surinder Kumar at Chak Sadda was under construction and its RCC part was completed and the stairs part load bearing structure was in progress.
He said during this rainy season, the stair part developed some cracks as the courtyard and roof top of the beneficiary was converted into muddy field and soil on the sides of the bunker and the stair due to the clogging of the drainage system led to sinking of side of stair wall but the main RCC structure of the bunker is intact and there is no crack or seepage of water in it.
The Executive Engineer said moreover the staircase is not the part of bunker but it was only constructed to provide convenience to the beneficiary during rainy season to prevent the rain water from entering into it. Moreover it is the duty of the beneficiary to protect the bunker and not to allow the entry of rain water inside the bunker to keep the drainage system in his area functional, he added.