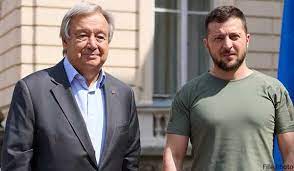 United Nations, Nov 19: UN Secretary-General Antonio Guterres held a phone call with Ukrainian President Volodymyr Zelensky on Thursday, and discussed the future of the Black Sea Grain Initiative and ways to improve its impact on the least developed countries, said a UN spokesman.
“And regarding their discussions, the basic point is that we want to make sure that the sort of food aid that is being shipped across the Black Sea through the initiative is able to not only ease world food prices, which is important, but also to provide relief … for least developed countries,” said Farhan Haq, deputy spokesman for Guterres on Friday.
Haq did not provide more details on the telephone conversation.
Guterres on Thursday welcomed the renewal of the Black Sea Grain Initiative for another 120 days.
The initial duration of the July 22 deal brokered by Trkiye and the United Nations is 120 days and expires on November 19. Russia and Ukraine agreed on Thursday to prolong the deal on the export of grain and fertilizers from Black Sea ports for another 120 days.
(UNI)