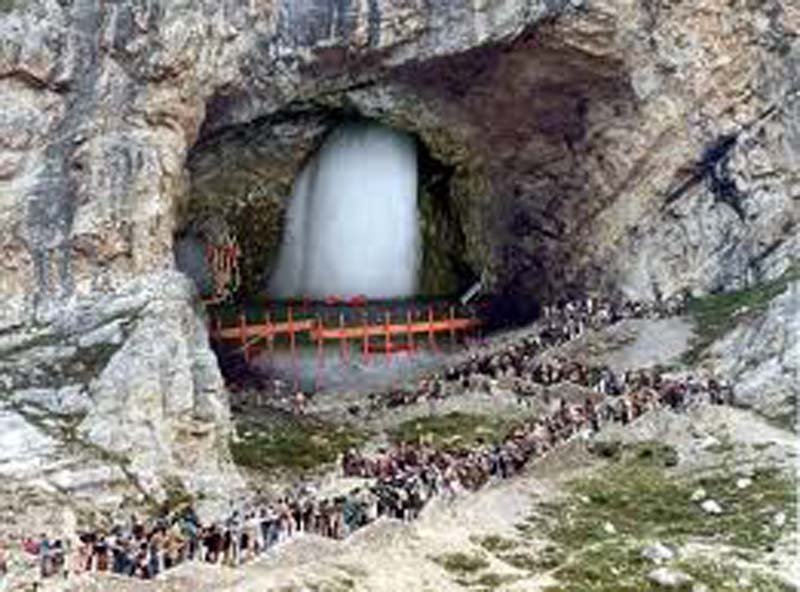 JAMMU, May 11: Lieutenant Governor Manoj Sinha today reviewed security scenario in Jammu and Kashmir especially the arrangements for upcoming annual 43-day long pilgrimage of Shri Amarnath Ji at the Unified Headquarters meeting attended by top brass of Army, paramilitary forces, Jammu and Kashmir Police, civil administration and Intelligence agencies among others at Raj Bhawan Srinagar.
This is the second high-level review for Shri Amarnath Ji yatra arrangements in the Valley. Union Home Secretary AK Bhalla had last month reviewed arrangements for the pilgrimage during his three days visit to Srinagar.
Both General Officers Commanding (GOCs) of Army in Jammu and Kashmir (15th and 16th Corps), Chief Secretary Dr Arun Kumar Mehta, Home Secretary RK Goyal, Principal Secretary to Governor Nitishwar Kumar, who is also CEO Shri Amarnath Shrine Board (SASB), Director General of Police (DGP) Dilbag Singh and all heads of Central Armed Police Forces (CAPFs), Intelligence agencies and civil and police administration in both Jammu and Kashmir divisions attended the meeting which was chaired by the Lieutenant Governor.
The meeting lasted three hours.
“The Unified Headquarters took detailed review of security arrangements for Shri Amarnath Ji pilgrimage including deployment of security forces at different places, total number of additional paramilitary companies required for security, elimination of hardcore militants planning to target yatra and strengthening of Counter Insurgency as well as Counter Infiltration Grids,” official sources told the Excelsior.
Shri Amarnath Ji pilgrimage this year is scheduled to last 43 days from June 30 to August 11.
Sources said senior officers of all security and Intelligence agencies briefed the Lieutenant Governor about proposed security measures and their requirements. The civil administration officials gave detailed briefing on other arrangements being made for the yatra.
While there was no official statement on the Unified Headquarters meeting, Sinha is reported to have directed for fool-proof security measures and other arrangements for annual pilgrimage. Going by heavy rush of tourists to Kashmir, the Government is expecting arrival of nearly eight lakh pilgrims for Shri Amarnath Ji yatra this year.
“Number of foreign and local militants, hybrid ultras and Over Ground Workers (OGWs) in the Kashmir Valley prominently figured in the meeting while police and security officers gave briefing about counter-militancy operations in which number of ultras have been killed, arrested and apprehended,” sources said, adding that some top militants have been eliminated on the yatra track, thus, averting potential threat to the pilgrimage.
Security forces are expected to launch more operations along the yatra track in the Valley to neutralize the militants. Focus is also on to avert fresh infiltration of the militants to disrupt the yatra, sources said, adding the steps are also being taken to avert intrusions from the International Border which has again come to fore following Sunjuwan terror attack on April 22 in which two militants were killed while a CISF ASI was martyred and 10 security personnel were injured.
This time, according to sources, security arrangements are going to be more stringent as the pilgrimage is taking place after two years. In 2019 when the yatra was last held, the Union Ministry of Home Affairs had sanctioned 336 additional paramilitary companies for the yatra. This year, the number is expected to be around 400 companies.
The yatra couldn’t be conducted in 2020 and 2021 due to COVID pandemic while it was cut short by about 15 days in 2019 ahead of Central Government’s August 5 decisions to scrap special status of Jammu and Kashmir and bifurcate erstwhile State into two Union Territories of J&K and Ladakh.
This is after gap of two years that pilgrimage to Lord Shiva’s holy cave shrine of Shri Amarnath Ji in South Kashmir Himalayas is being revived as COVID is now almost over.
The Home Department and Police Headquarters are working out details of the paramilitary companies which would be sought from the Union Home Ministry for the yatra.
“The details will be worked out this week and sent to the Home Ministry,” sources said.
As per the reports, the Jammu and Kashmir Government could seek at least 400 additional companies of CAPFs from the Centre for making fool-proof security arrangements for Shri Amarnath Ji pilgrimage. The numbers are being worked out taking into account targeted killings by the militants and steps required to protect the soft targets as well as the pilgrims all along the National Highways including Pathankot-Jammu and Jammu-Srinagar besides twin tracks of Baltal and Nunwan, base camp in Jammu and all other vulnerable areas.
Sources said the Central and Jammu and Kashmir Governments are likely to take services of Army, BSF and ITBP also for annual pilgrimage though a final decision in this regard is yet to be taken.
While Army could man some places of Pathankot-Jammu and Srinagar-Jammu National Highways besides Shri Amarnath Ji cave shrine in South Kashmir Himalayas, the BSF could also be deployed on the highways. The ITBP might be placed in some areas of twin tracks.