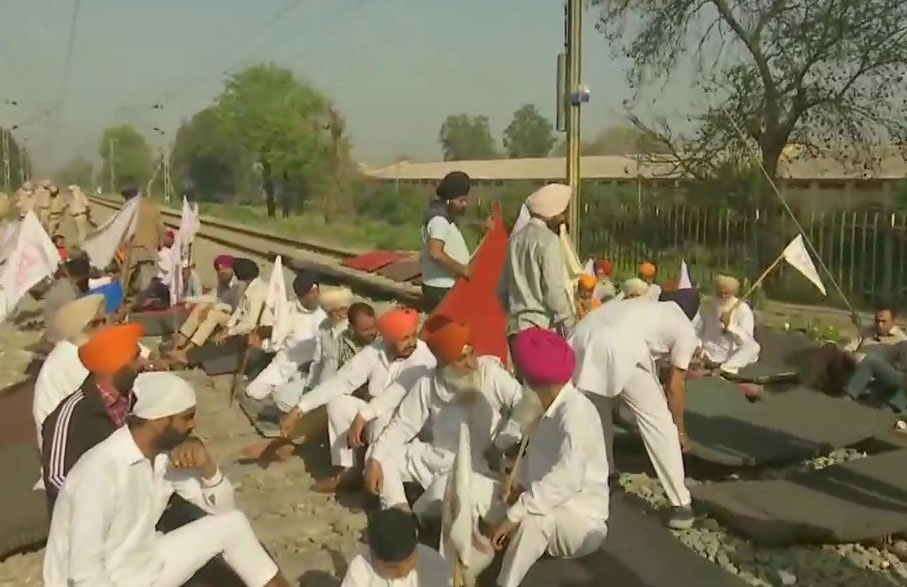 JAMMU, Dec 21: The train services remained suspended for the 2nd consecutive day today in Jammu and Kashmir due to ‘rail roko’ agitation of farmers in Punjab with many stranded passengers bound to spend their time on platform. However, railway authorities tonight decided to ply two special trains between Amritsar and Katra Railway Stations for stranded passengers tomorrow.
According to the reports, a large number of farmers under the banner of Kisan Mazdoor Sangarsh Committee have blocked several rail routes in Punjab including Ludhiana-Amritsar and the Ludhiana-Jammu railway routes to press the Government to concede to their demands which include farm loan waiver, compensation and jobs for the kin of farmers, who died during the agitation against the now-repealed farm laws.
Blockade of rail tracks by the protesting farmers led to cancellation of all the inbound and outgoing trains from Jammu and Kashmir for the 2nd consecutive day. However, the Diesel Multiple Units (DMUs) from Udhampur to Pathankot were moving smoothly. Due to cancellation of trains since yesterday, many passengers were stranded at Katra, Udhampur and Jammu Railway Stations.
Due to cancellation of trains, the number of pilgrims visiting the Mata Vaishno Devi Shrine in Katra has come down considerably as 80 percent pilgrims to the shrine come through rail route while those scheduled to return to their homes after the pilgrimage have been stranded at Katra Railway Station. The stranded passengers expressed their anguish against Railway authorities.
“We have come here with little children. We are common man and meet our both ends by doing labour work in Bihar. We don’t have much money, While the train services have been suspended, the bus operators are demanding Rs 2000-3000 per passenger. We are bound to spent day and night in the open as Railway authorities here have not made any arrangement for us,” said Pooja Devi, a woman from Bihar.
Harjeet Singh, another stranded passenger said that it is the responsibility of the Railway authorities to make boarding arrangements for the stranded passengers but no such arrangement has been made by the authorities and the poor passengers are forced to spent night on the platform.
Station Manager, Jammu, Rajeev Sabharwal said due to farmers’ agitation in Punjab, all 16 trains arriving and departing from Jammu, Katra and Udhampur Railway Stations were cancelled today. He said majority of the passengers after cancelling their tickets have left for their destinations by road transport but some are still taking shelter at platform of Railway Station or nearby guest houses with the hope of resumption of train operations.
Divisional Traffic Manager (DTM) of Jammu Railways, Mahesh Kumar told Excelsior that due to farmers protest in Punjab, all the inbound and outgoing trains had to be cancelled. He said neither any train from any part of the country entered J&K nor depart from here. “We are keeping hawk’s eye on the situation in Punjab. The authorities in Punjab are trying to convince the agitating farmers to leave tracks. As soon as the situation improves, the train operations will be resumed,” he asserted.
Late in the night, the DTM informed that Railway authorities have decided to start two special trains between Amritsar and Katra for stranded passengers as tracks on this route are clear. He said the first train will depart from Amritsar Railway Station at 5:50 am tomorrow and the other will depart from Katra Railway Station at 6 am tomorrow.