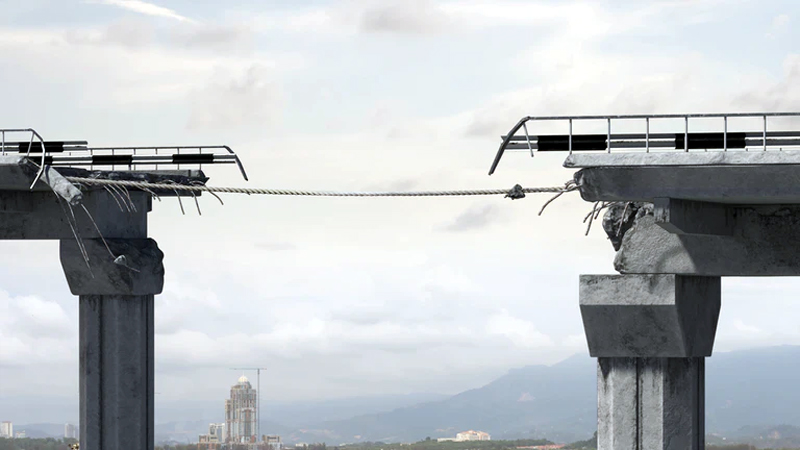 Srinagar, Dec 30: Over a decade after the construction work of two vital bridges in South Kashmir’s Pulwama district began the work continues to drag on despite the availability of funds, bringing misery for the residents of several villages.
The bridges are being constructed nearly 15 kilometers away from Pulwama town at Dogripora and Reshipora areas. Once complete, the bridges would connect several villages of the district including Naina, Panzgam, Reshipora, Chandigam and Hari with the Srinagar-Anantnag Highway.
After remaining suspended for over six months, the work on Reshipora bridge resumed recently, but is moving on at snail’s pace. The work on the Dogripora bridge remained suspended for the want of “administrative approval”.
Six months back Jammu and Kashmir Projects Company, the executing agency of the project suspended all the work citing nonpayment of funds. To overcome the issue of funding, the Government listed the bridges as languishing and funds were also approved. However, a lengthy paper work further delayed the project. “We have sent the necessary papers to the Government once but they did not grant the approval. They are seeking more papers and those have also been send. The money is available, but we could not avail funds until administrative approval is given,” an official, who is aware about the developments, told Excelsior.
Deputy General Manager (DGM) Pulwama, JKPCC, Masood Gangoo said that all the issues have been settled and the construction work on one bridge is going on. “Funds for the Reshipora bridge have been released and work is going on. For Dogri we are awaiting for the administrative approval. We have done the necessary paper work and would soon receive funds,” he said.
Whether it is the inefficiency of the executing agency to complete the necessary paper work on time or lengthy paper work and Government’s failure to complete the projects is taking a toll on the people. They complained that they are facing problems of commuting in absence of the bridges.
“We have to either travel to the Awantipora or board overcrowded fishing boats to cross the river to reach highway,” Mohammad Lateef, a resident of Dogripora said, adding for last one decade people were awaiting completion of the bridge.
As per the officials of the JKPCC, main reason behind the delay in the completion of the project was frequent change of funding agencies. They said both the bridges were taken up under State sector in 2007, but the funds fell short, prompting the authorities to transfer them to Central Road Fund (CRF). That did not help and the authorities decided to get funds from National Bank for Agriculture and Rural Development (NABARD), but failed to do so. They even tried to divert the one bridge to complete the other but nothing changed. After exploring all the options, they said, the Government decided to execute the bridges under languishing projects.