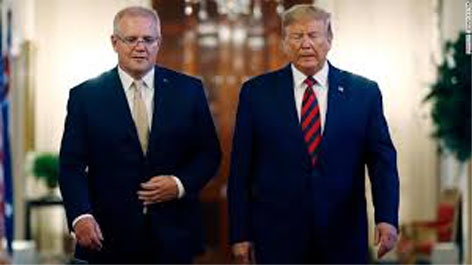 MOSCOW, Jan 7: US President Donald Trump has called Australian Prime Minister Scott Morrison to offer help in battling the deadly bushfires that have been ravaging the nation for months, a White House spokesperson has said. “President Trump offered United States support to assist the Australian government as it battles these terrible fires,” the spokesperson said, as quoted by The Hill news outlet on Monday. The US leader also “expressed deep concern for those affected and condolences for the firefighters and others who lost their lives,” according to the White House. Following the call, Morrison thanked the US for support. “Thanks for the call @realDonaldTrump and for your strong messages of sympathy, support and friendship for Australia during our terrible bushfire season. Thanks also to the American people for their many messages of support. Australia and the US are great mates,” the prime minister tweeted on Tuesday. On Monday, UK Prime Minister Boris Johnson offered his help to fire-ravaged Australia in a call with Morrison. For months, Australia has been suffering from massive fires. According to the latest media reports, the bushfires in Australia have already claimed at least 25 lives and destroyed over 1,000 houses. The fire crisis has also killed an estimated 8,000 koalas and hundreds of thousands other animals.
(AGENCIES)