NEW DELHI, Feb 25:
US President Donald Trump and First Lady Melania enjoyed ‘naan’ and ‘sikandari raan’ from the famed Bukhara restaurant of ITC Maurya, where the couple stayed during their visit to Delhi, sources said.
Trump’s daughter Ivanka and his son-in-law Jared Kushner were at the Bukhara, they added.
Sources said the president and the first lady liked ‘naan’ and ‘sikandari raan’, roasted mutton leg for which the over four-decade-old restaurant is known for.
Hotel authorities, however, remain tight-lipped.
The entire hotel was booked for the US delegation accompanying Trump.
The President stayed in the Grand Presidential Suite of the five-star property, which has hosted his predecessor Barack Obama and other US presidents like George W Bush and Bill Clinton.
Trump, who was on his maiden visit to India, landed in Delhi on Monday evening after attending the ‘Namaste Trump’ event in Ahmedabad and visiting the Taj Mahal in Agra.
The hotel was under a three-tier security cover and the Indian security agencies were working in close coordination with the US Secret Service. (PTI) 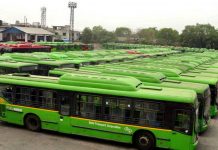