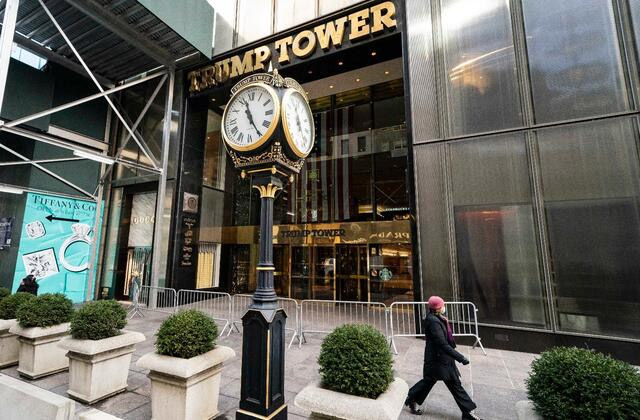 New York, Mar 10: A bank’s decision to loan Donald Trump’s company USD 100 million is the latest evidence the former president might survive fraud investigations and a business-world backlash over his efforts to stay in office after losing the 2020 election.
San Diego-based Axos Bank finalized the loan with the Trump Organization on February 17, according to documents filed with the city Tuesday.
That’s just three days after public revelations that the Republican’s longtime accountants had disavowed a decade’s worth of his financial statements amid allegations by New York’s attorney general that they had exaggerated his wealth.
The Axos loan is being used to pay back an old loan backed by commercial space at Trump Tower that was coming due in September.
A year ago, it looked possible that Trump might become a pariah after his supporters stormed the US Capitol in an attempt to stop a vote certifying President Joe Biden’s election win. Banks, insurers and other business partners all cut ties following the riot.
Last year, the Trump Organization was indicted in New York on charges it helped executives evade taxes. And for two years, the company has been the subject of civil and criminal investigations by New York Attorney General Letitia James and the Manhattan district attorney.
But in the fall, Trump struck a deal to sell his Washington hotel for far more than expected. And a partnership he’s involved with that owns two office towers recently took out new loans for far more than needed to pay off old ones coming due.
“He bounces back,” says Barbara Res, a former Trump Organization executive who is not a fan and even urged people not to vote for him.
“If a guy brings me a property with good cash flow, a good location and good tenants, why do I care what his politics are?” says Mike Offit, a former Deutsche Bank lender to Trump who now consults on real estate finance. “Trump has good buildings and manages them well.”
The Trump Organization declined to disclose the interest rate on the new loan and other terms. Axos, citing customer privacy rules, would not comment.
Asked for comment for this story, one of Trump’s sons lashed out at journalists for depicting the family company as struggling.
“We should have never been underestimated,” Eric Trump said in an emailed statement, adding, “We have very low debt, are sitting on tremendous amount of cash and have extremely profitable properties.”
Assessing the Trump Organization’s overall financial health is challenging, given that it is a private company that releases few figures publicly.
During his presidency, Trump’s name was stripped off hotels and residential towers in several cities. His Scottish golf course lost millions, and condos in his apartment buildings have been selling at deep discounts.
Coronavirus shutdowns added to the trouble. Revenue at the company’s biggest golf property, the Doral outside of Miami, plunged USD 33 million in the two years through 2021, down 44%, according to financial records obtained by a government ethics agency.
Then came the Capitol riots and a rush to exits as Trump’s longtime commercial office broker, his two biggest lenders, the PGA of America and others cut ties.
The company helping him shop around his Washington hotel severed its relationship, too, after removing it from the market for a lack of demand. New York City announced it was canceling all city contracts with Trump, including the rights to operate a public golf course in the Bronx. Eric Trump branded the city’s move a product of “cancel culture” and vowed to fight it.
The city’s decision to kick Trump off the course has been tied up in court and now, several months after Trump was supposed to leave, he is still running it, his name spelled out on a hillside in giant paving stones seen from miles away. The Trump Organization says that it will go but that the city has to pay it $30 million first.
Meanwhile, Trump’s biggest office buildings, though suffering, have not seen a widescale exodus of tenants.
One of its biggest commercial tenants, Gucci, decided last year to extend its Trump Tower lease for another 16 years, according to financial documents from commercial lending research firm Trepp.
That building pulled in USD 19 million in revenue in the first nine months of last year, down from previous years, but enough to pay expenses and interest.
Axos previously made loans backed by at least two properties owned by the Kushner Cos., the family real estate firm once run by Trump son-in-law and White House adviser Jared Kushner. The bank also benefited from a policy change in the Trump administration allowing high interest loans.
The Trump Tower loan follows other deals to refinance mortgages on a building in San Francisco and for a Sixth Avenue tower in New York, both 30% owned by the Trump Organization and 70% owned by publicly traded real estate giant Vornado.
Under the deals arranged by Vornado, the partnership borrowed more money than it owed on the old loans, and Trump’s share of that extra cash could have been as much as USD 200 million, based on the size of his stake.
Trump’s company still has plenty of other loans to refinance, including a USD 125 million one involving Doral, due next year.
More than a dozen hotel brokers and experts who talked to The Associated Press in recent months had estimated Trump was unlikely to make money off a sale of his long-term lease of the Old Post Office building, a federal property he started turning into a hotel nearly a decade ago.
But then a Miami firm joined with former Yankees star Alex Rodriguez to offer USD 375 million for the money-losing property. The deal still needs to be approved by a federal agency overseeing the building.
(AGENCIES)