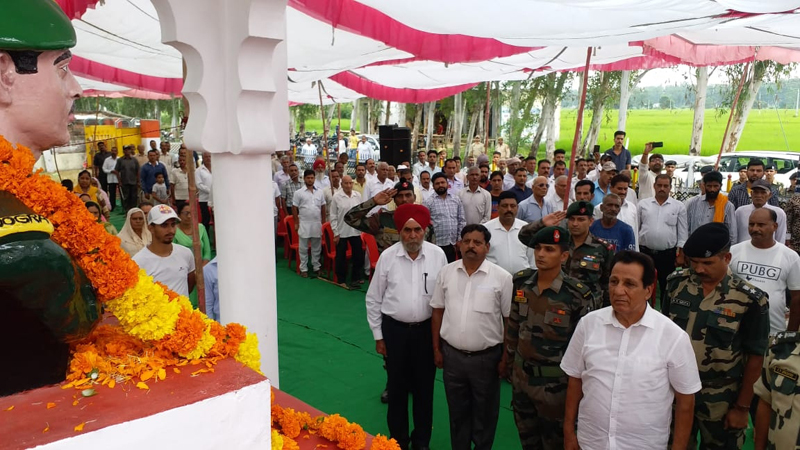 JAMMU, Sept 5: Martyr Ramesh Lal of 8th Dogra hailing from Kaleon village was paid rich tributes on his 21st death anniversary in Suchetgarh today.
Sepoy Ramesh Lal’s (Sena Medal) death anniversary was celebrated today as Martyr Day (SAHEEDI – DIWAS) at his native village KALEON (Suchetgarh). Ramesh sacrificed his life on September 5, 1998 in Poonch while fighting the militants. The function started with the wreath laying ceremony with full military honours to the Martyr.
Krishna Devi, mother of Shaheed Ramesh Lal was the first to lay the wreath and it was followed by the chief guest and others.
Former minister RS Chib, while paying rich tributes to the Martyr said that the Nation in general and we all in particular are proud of the sacrifice made by Ramesh Lal. His sacrifice, Chib added, will always inspire our younger generations to serve the country.
While appreciating the role of security forces, in crushing the ugly head of militancy in the State, Chib said that the Pakistan has lost its face on all international fora and totally is confused and frustrated country. The decision of Govt of India taken on August 5, 2019 regarding the State of J&K, have put to rest, all types of false claims and propaganda in respect of Kashmir by Pakistan, said Chib.
OP Upadhaya, Col Negi and Col Rawel Singh, after the wreath laying ceremony also paid tributes to the Shaveed Ramesh Lal. Upadhaya said that it is our duty to remember our heroes like Ramesh Lal and expressed his satisfaction over the excellent co-operation between the BSF and civil society residing on the border. Col Rawel Singh also spoke on behalf of the Rajya Sainik Board and paid tributes to the martyr and said that the Rajya Sainik Board will also open an office at RS Pura shortly.
The tributes were also paid by Sarpanches Gurdyal Majotra, Ch. Surjit Singh and Tarsem Lal.

JU organizes webinar on ‘SCOPUS for Faculty, Scholars and Students’

‘Use and throw policy’ for educated youth to lead to disaster: Harsh