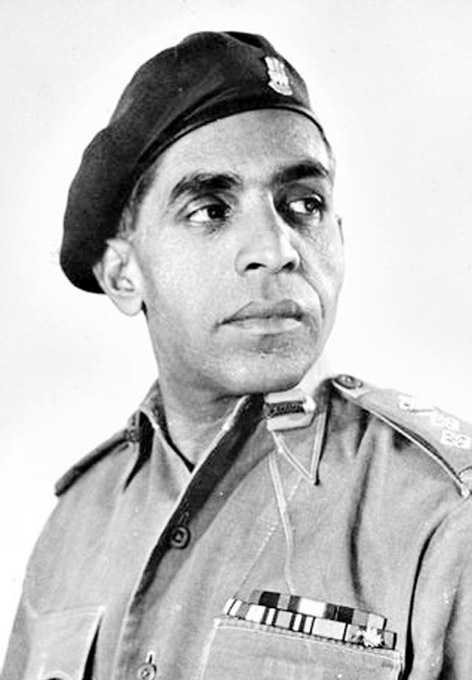 Ravi Rohmetra
Late Brig. Mohd. Usman stands as a personification of the secular traditions of the Indian Army. He made the supreme sacrifice in the Battle of Jhangar on 3rd July, 1948. Brig. Usman was born on 15th July, 1912 at Bibipur which is a part of today’s Azamgarh district in Uttar Pradesh. Usman was educated at Harish Chander Bhai School in Varanasi. Despite intense competition, Usman succeeded in gaining admission to the prestigious Royal Military Academy at Sandhurst. Upon completion of his training, he was commissioned in Baluch Regiment and it was as a Baluch Officer that Usman had to face the cruel specter of partition in 1947. Despite intense pressure from the Pakistani leadership to join the Army of the new nation, Brig. Usman remained committed to the ideals of his motherland. The ultimate bait of becoming the Pakistan Army Chief also proved unsuccessful in tempting him and he remained steadfast in his resolve the serve the land of his birth. When the Baluch Regiment was allotted to Pakistan, Brig. Usman was transferred to Dogra Regiment. But war had already been thrust upon India when Pakistan sent tribal irregulars and its soldiers into Jammu and Kashmir. Even as the situation in the Kashmir Valley was stabilized the threat continued to be serious in the Jammu region. Brig. Usman Commander of 77 Para Brigade was side stepped to command 50 Para Brigade, deployed at Jhangar in December 1947. However, with odds heavily against him, Jhangar was wrested by the Pakistanis on 25th December, 1947. The Brigadier vowed to recapture Jhangar – a feat he accomplished three months later. With the fall of Jhangar, the emboldened Pakistanis seized Naushera and the situation looked grim indeed. In the face of overwhelming odds, he effected the defence of Naushera during the crucial battle by February of 1948.
Naushera was defended despite heavy odds and a numerically superior enemy was defeated. This proved to be the turning point in the campaign that earned Brig. Usman two titles of endearment – “Hero of Naushera” and “Savior of Naushera”. Jhangar, however, loomed large in his mind and the liberation of which became his obsession. After a month’s planning, he was able to put into motion his operation to free Jhangar and on 18th March, the Para Brigade achieved its objective. Jhangar was once again in Indian hands. But it was Jhangar that cost Brig. Usman’s life on 3rd July, during a lull in shelling. When Brig. Usman came out of his tent, in no time, a single shell caught him killing him instantly. In a moving ceremony, Brig.Mohd. Usman was given a state funeral and a posthumous Mahavir Chakra. The enormity of his achievements from the nation’s point of view, can be gauged from the fact that on his being martyred on 3rd July 1948, he was given a state funeral in New Delhi by a grateful nation’s leadership. It is note worthy that Brig. Mohd. Usman, MVC remains India’s only military commander to have been given this singular honour with the nation’s eminent leaders which include the then Prime Minister Pandit Jawahar Lal Nehru, Sheikh Abdullah, the then Defence Minister Sardar Baldev Singh, Maulana Abdul Kalam Azad and then CAOs attending his funeral, before he was buried in the Jamia Milia Islamia at Delhi. It is also note worthy that Brig. Mohd. Usman MVC remains India’s highest ranking military commander till date, to have made the supreme sacrifice on the battle field itself, while leading his men in action, in the face of the enemy.
feedbackexcelsior@gmail.com