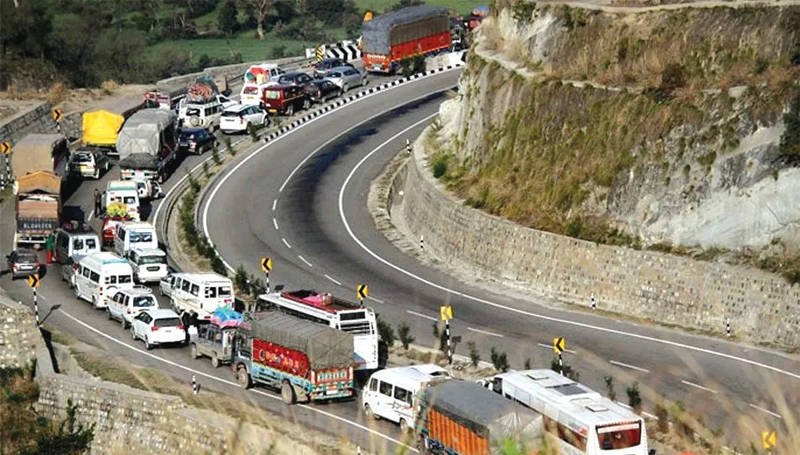 Excelsior Correspondent
RAMBAN, Sept 28: Traffic on Jammu-Srinagar National Highway remained suspended for about nine hours today after frequent landslides and falling of boulders on the road in Ramban sector while passengers including children remained stuck in the massive traffic jam for hours together.
Sources said that at around 3 am today, the busy highway was closed for maintenance and road clearance work in Mehad and Cafeteria Morh area of Ramban. But restoration work was delayed due to frequent falling of boulders at Mehad. The road was restored at around 8.30 am.
On Maitra road, the traffic movement of even Light Motor Vehicles has already been stopped due to damage caused to old Chanab bridge. So, the authorities have stopped diversion of the LMVs.
The movement of traffic including fruit laden trucks from Kashmir side to Jammu and fuel/ LPG tankers from Kud and Batote side to Valley, which were stranded for the last four-five days, were allowed towards Kashmir. Many passenger vehicles, stranded on either side were also allowed to move ahead. However, due to landslide again, the road was blocked at Mehad at around 12 noon. A long traffic jam was created. Frequent falling of boulders caused major threat to the lives of the passengers at this point.
The highway was then restored at around 6 pm and the movement of traffic was allowed. However, the traffic jam in the entire Ramban-Banihal- Ramsoo- Nashri areas created mess on the highway. The passengers and specially the children suffered for hours together due to long traffic jams on about 80 kms road stretch.
Deputy Commissioner, Ramban Mussarat Alam and SSP, Mohita Sharma were also caught in the traffic jam for hours as they had gone to Banihal to attend a function and also review traffic problem along the highway at Banihal and Ramsoo. They directed the SDM Banihal to clear all the traffic obstacles and encroachments along the highway in Banihal area.