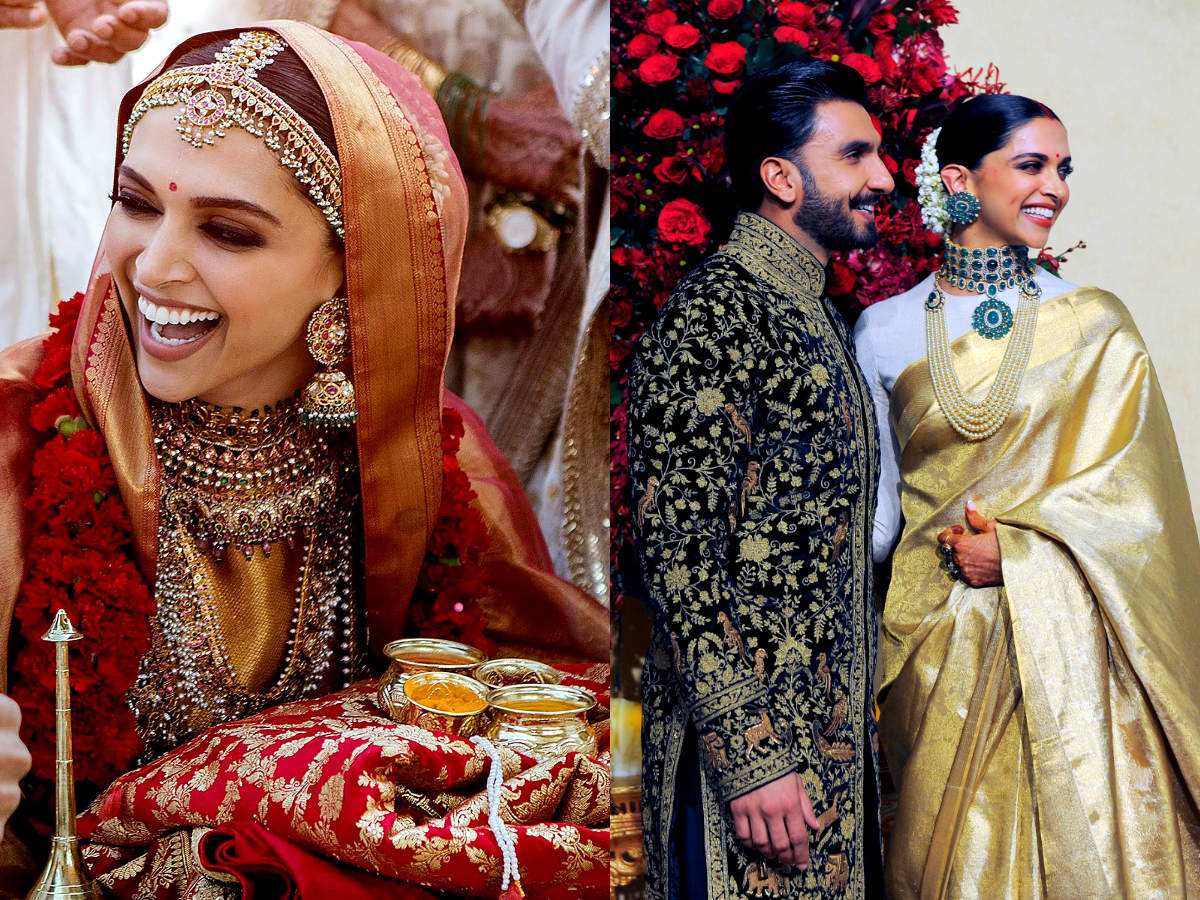 The traditional look of heirloom jewellery is ruling the roost now in the bridal trousseau, amply evidenced in the celebrity weddings in the recent past, finds Pooja Mahesh
Think of the Indian bride. Can you bypass the role of the jewellery? After all, it complements the attire in such a way that everything falls into place to bring out the radiance and elegance of the bridal look.
No wonder that smart brides today look for the perfect jewellery set for the Big Day. While some go for the contemporary look, others choose the traditional look- with a bit of difference, though.
If you wonder how, think back on what film stars Deepika Padukone, Sonam Kapoor Ahuja, Priyanka Chopra and Anushka Sharma wore for their wedding celebratons: traditional heirloom jewellery that complemented their bridal trousseau.
“Film stars and period movies, in fact, have helped many traditional designs like the polki and jadau come back into the mainstream. Subsequently, it has boosted the popularity and demand for traditional heirloom jewellery during the wedding season,” says Ishu Datwani, founder, Anmol Jewellers, Mumbai.
Little wonder that many trendy brides are now turning to wearing traditional heirloom jewellery that are either recreated, or are passed down from generations.
While popular film stars may have helped popularise heirloom jewellery, it is perhaps because of its understated appeal that has caught the attention of many a bride-to-be. “The trend of brides wearing heritage jewellery started around three or four years ago. As there has been a lot of talk on revival during the past few years, there has been a surge of interest in old jewellery designs and patterns, particularly among the youngsters,” says Ashwini Oza, co-founder and chief designer at Arnav & Co, Bengaluru.
What makes traditional jewellery unique and sought- after by many brides? “This is perhaps due to an excessive presence of fashion and bridal jewellery in the market that fades as trends change. Heirloom jewellery pieces are stunning and add an ethereal touch and feel to the wearer and completes the look with elegance and grace,” says Raji Anand, founder and designer, Raji Anand Design, Chennai. Some of the jewellery pieces that brides usually go for include traditional diamond and ruby chocker, temple jhumkas, pashas, huge matha ka tikkas and kajara bangles.
Moreover, for many brides, wearing heirloom jewellery pieces mean embracing their roots. “Wedding is when the bride can showcase her culture and can take it forward by wearing something that is either old, borrowed or new,” reiterates Puja Shah, founder and jewellery designer, Aurus Jewels, Ahmedabad.
Traditional jewellery has an intrinsic old-world charm, authenticity and heritage value to it. “Heirloom jewellery is something that is classic and timeless. They can be passed down and do not look dated even after decades,” believes Datwani.
While gradually shifting towards heirloom jewellery and designs, some are also looking at modern day interpretations of traditional designs. “While going back to the roots and heritage for inspiration, jewellery designers are not far behind. Many are digging into what we already have and contemporising it. In essence, they are keeping the flavour of the past but are adapting it to the modern day context,” says Shah.
While these are newly minted ‘heirlooms’, there are also instances where family heirlooms are modified carefully, if possible, to infuse a new lease of life into it. One of the most common ways that heirloom jewellery pieces are modified are by tweaking existing pieces in a small way to make more wearable. For example, a multi-layered ranihaara can be spilt into two or more smaller necklaces.
However, given the wide variety of choices available today, it is also imperative that one chooses wisely. Today’s bride, more often than not, may take a well-informed approach to select her jewellery and take into consideration the quality and versatility of each piece . Hence, many choose to select a few that will stand the test of time and a few others that are ‘of-the-moment’. In short, the wedding jewellery needs to be designed in a way that can complement the needs of the modern- day bride not just on her wedding day, but beyond as well.
“The designer’s job is to understand and respect the old, understand what the client needs, and understand that we are all global citizens. I would still love to wear an old, traditional piece with a gown or a simple white T-shirt. While the main piece is going to be heritage, how you are going to use and wear it needs to be in the modern context,” elaborates Oza.
What then are some of the aspects that a bride needs to keep in mind while selecting her jewellery? “While teaming up with heirloom jewellery, it’s important to keep in mind the bridal outfit’s colours, its silhouette, garment used. Knowing what these elements are can help in selecting the style and cut of the jewellery,” shares Anand. It is also important to ensure that the jewellery and outfits do not overpower each other . Oza advises brides to select their jewellery first before their outfits as it is “something that can be used repeatedly over time and can be changed over time”. (Trans World Features)