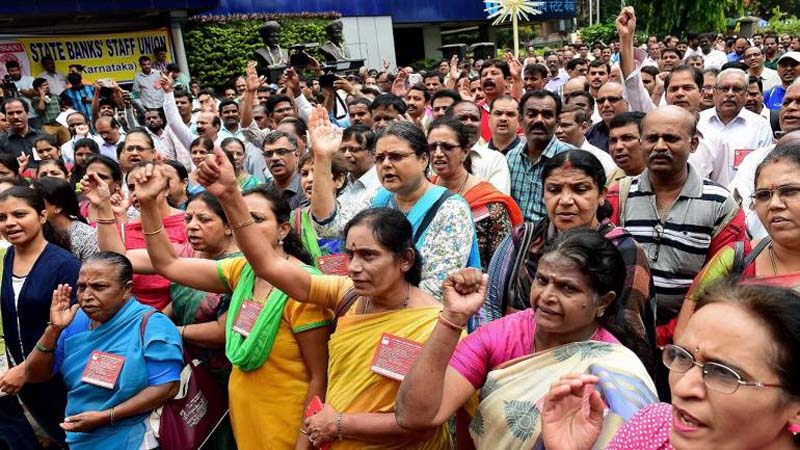 The unions during a pre-budget meeting also demanded hiking slabs for exemption of income tax for salaried persons and pensioners to Rs 10 lakh per year. They asked for Rs 8 lakh income tax slab for senior citizens and exemption of all perks and fringe benefits like housing, medical and education facilities and running allowances from income tax.

Besides, the representatives of around a dozen central trade unions expressed their reservation against the privatisation and divestment in profit-making public sector undertakings and stressed on increasing investment for job creation in the pre-budget meeting with Minister of State for Finance & Corporate Affairs Anurag Thakur.

After the meeting, some of trade union leaders also expressed their unhappiness over the absence of Finance Minister Nirmala Sitharaman in the meeting. Thakur chaired the meeting as Sitharaman had to attend the NITI Aayog’s Governing Council meeting held around the same time.

All India Trade Union Congress (AITUC) General Secretary Amarjeet Kaur said, “Finance Minister Nirmala Sitharaman had invited us for pre-budget consultations. But we had a discussion with Minister of State. They tried to limit the discussion on four broad points protection of labour, skill development, jobs and wages.”

However, she said, “We, the 10 central trade unions group, put up all of our points. We have demanded for Rs 20,000 minimum wage, Rs 6,000 minimum monthly pension and guaranteed employment of 200 days under MNREGA (100 days at present).”

She stressed that the government needs to make investments for creating jobs and stop divesting and privatising public sector undertakings as well as the implementation of fixed-term employment announced in the last budget.

She also pointed out that the government had given no heed to their suggestions and demands in the budget last year.

Indian National Congress Union Congress (INTUC) President G Sanjeeva Reddy said, “We have opposed the idea of giving profit being earned by the government to the private sector. We have opposed privatisation and divestment in profit-making PSUs. There is no such need.

Reddy said, “There is a need for creating jobs at present. Besides we have opposed the consolidation of 44 labour laws into four codes. At present, individual labour laws are not being implemented.”

In a statement, the Finance Ministry said that experts and representatives from various trade unions and labour organisations gave suggestions related to the alignment of skill development with aspirations of rural youth with a focus on agriculture; the need for strict enforcement of Minimum Wages Act and introduction of the comprehensive unemployment insurance scheme.

They also asked for a revision of ITIs’ syllabus for enhancing employability; provision of social security for contract workers; and giving a boost to the capital intensive industry.

Other demands included conversion of casual/contractual workers to formalised employment; fixation of minimum wages on the recommendation of 15th Indian Labour Conference; increase in allocations on social sector and basic essential services like health, education and food security; extension of MGNREGA to remaining all rural areas and introducing it in urban areas besides increasing number of workdays under the scheme to 200 days and creation of National Fund for Unorganised Workers to provide social security. (PTI)