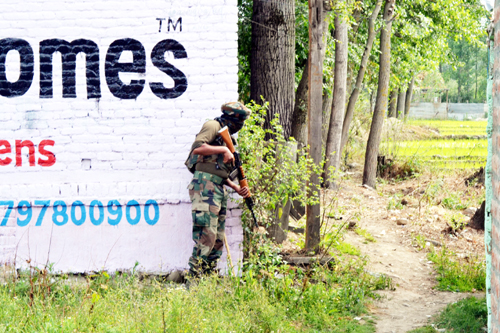 Fayaz Bukhari
SRINAGAR, June 24: A top Lashkar-e-Toiba (LeT) commander was among two militants killed and another surrendered during encounter in Qoimoh area of South Kashmir’s Kulgam district today while a civilian was killed and over a dozen injured during clashes near the encounter site. And a youth who was injured in clashes in Anantnag district last week succumbed to injuries at a Srinagar hospital today.
Security forces today cordoned off Chedar Ban area of Qoimoh in Anantnag district of South Kashmir after inputs about presence of three militants of LeT inside a house. As they cordoned off the village and launched searches, militants fired at them leading to a gun battle which last several hours during which two militants of LeT were killed and one of them identified as Shakir Ahmad surrendered. Shakir had joined LeT two months back.

A police spokesman said that as a joint patrol party approached towards the suspected house, a group of militants hiding inside fired indiscriminately on the security forces and the troops retaliated leading to an encounter.
“In the encounter, the two terrorists hiding inside the house were successfully eliminated by the security forces. On the basis of the materials recovered, it is understood that the killed terrorist is Shakoor Dar, the divisional commander of LeT while the second terrorist was a Pakistani known as Haider”, the spokesman said.
The spokesman said: “When two terrorists were killed, one local terrorist whose identity is being protected, surrendered at the encounter site before the authorities and security forces strictly followed SOP while conducting the operation. This terrorist is in the custody of police”.
Police said that Shakoor Ahmad Dar son of Mohammad Munawar Dar resident of Sopat Tengpora was operating as divisional commander of LeT. “Several terror-related cases were registered against Shakoor in different police stations of South Kashmir including FIR 02/2017, u/s 121A, RPC, 7/25 Arms Act at PS Devsar, FIR 260/2017, u/s 302 RPC, 7/27 Arms Act at PS Qazigund, FIR 275/2017 u/s 16, 18 ULA at PS Qazigund, FIR 306/2017 u/s 120B, 307 RPC, 7/25 Arms Act at PS Qazigund and FIR 307/2017 u/s 120B, 7/27 Arms Act, 13, 16, 18, 39 ULA at PS Qazigund.  He was involved in a number of other civilian atrocities and attacks on security establishments in the area”, the spokesman added.
“Incriminating materials and huge quantity of ammunition were also seized from the site of encounter. Police has registered a case in this regard and initiated investigation in the instant matter”, the spokesman added.
A 23-year-old youth was killed and over  a dozen injured during clashes that broke out near the encounter site.
Yawar Ahmad Dar, 23, son of Ghulam Ahmad Dar, a resident of Gasipora Wanpoh, was critically injured in his chest during the clashes near the encounter site at Chadder area of Qoimoh.
He was shifted to District Hospital Anantnag where doctors declared him as brought dead. Over a dozen protesters were injured during clashes near the encounter site.
The police spokesman said that in the encounter one civilian identified as Yawar Dar sustained injuries in cross firing and was evacuated to the hospital for medical treatment. However, he succumbed to his injuries.
And a youth, who was critically injured at Nowshera area of Srigufwara in Anantnag district of South Kashmir on Friday, succumbed at SKIMS today.
Shahid Nazir Hajam of Sirhama village had sustained critical bullet injuries in head in forces action during clashes at Srigufwara on Friday.  Shahid succumbed to injuries this afternoon at SKIMS Soura. Bedsides, Shahid, at least two dozen persons were injured as security forces fired tear smoke, bullets and pellets to disperse protesters. Four militants, civilian and a cop were killed in the encounter on Friday at Srigufwara.
In the meantime, police in Anantnag today arrested two Over Ground Workers (OGWs) of Hizbul Mujahideen outfit and recovered grenade from their possession.
A police spokesman said here that today at about 1200 hours, a joint checkpoint  was established by Anantnag Police and 1-RR at Tulkhan crossing new National Highway in Anantnag district.
“During checking two persons were found roaming around suspiciously. The naka party apprehended them tactfully and they were searched. One live grenade was recovered from their possession”, he said.
“They were identified as Amin Ahmad Sofi son of Abdul Jabar resident of Charligund Awantipora and Tanveer Ahmad Bhat son of Ghulam Ahmad resident of Chechikot Awantipora”, police said.
The spokesman said that they were involved in grenade attack at Bijbehara last month in which 10 civilians were injured. “Further investigation revealed that they were assisting the HM terrorist Hamad Khan operating in Tral area and were involved in the grenade attack at Goriwan Bijbehara on May 23 this year in which 10 civilians were injured”, he said.
Police has registered a case in the instant matter and further investigation is going on.