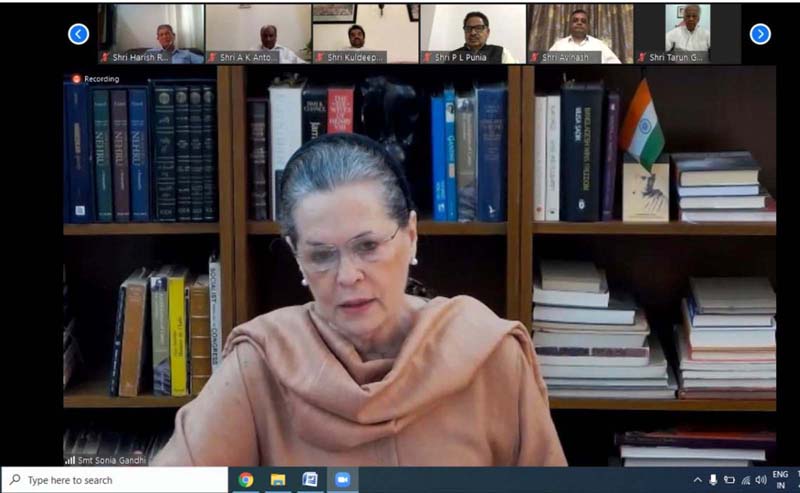 NEW DELHI, Apr 2:
Top Congress leaders on Thursday discussed the situation arising out of the coronavirus outbreak, with party chief Sonia Gandhi criticising the Centre for “unplanned” implementation of the lockdown and calling for “solidarity” in meeting the challenge posed by the pandemic.
Besides Sonia Gandhi, former prime minister Manmohan Singh, former Congress chief Rahul Gandhi and other senior leaders discussed the health crisis at a meeting of the Congress Working Committee (CWC) held through video conferencing.
Addressing the meeting, Sonia Gandhi said the country is in the midst of an unprecedented health and humanitarian crisis that has caused “untold suffering” across the world but also “reaffirmed the bonds of brotherhood” that unite humanity.
“The magnitude of the challenge before us is daunting but our resolve to overcome it must be greater,” she said.
She said in India, the poor and disadvantaged have been most vulnerable to the consequences of the pandemic. “We must come together for their sake and do all we can to support them through the difficult days that lie ahead,” she said.
Describing as “heartbreaking” the sight of lakhs of people walking for hundreds of kilometres without food or shelter, she criticised the government for its “unplanned” implementation of the nationwide lockdown and causing hardships to the poor.
“The 21-day national lockdown may have been necessary but the unplanned manner in which it has been implemented has caused chaos and pain in the lives of millions of migrant workers all over India,” she noted.
“It is the duty of us all to do our utmost to lessen their suffering,” she said.
The Congress chief said to fight the COVID-19 virus, there is no alternative to constant and reliable testing.
“Our doctors, nurses, and health workers need all the support. Personal Protection Equipment such as hazmat suits, N-95 masks must be provided to them on a war footing,” she said.
Former Prime Minister Manmohan Singh said the Congress Party stands as one with the nation to take on the challenge of the pandemic.
Former Congress president Rahul Gandhi criticised the Centre for its alleged lack of assistance to the poor especially migrant workers.
“No country in the world has attempted a lockdown with huge migrant labour without arranging for their stay, food and ration and pushing them back home,” party chief spokesperson Randeep Surjewala said quoting Rahul Gandhi.
Calling for an “India-specific strategy and consultation” with regard to COVID-19, Rahul said the party has looked at the situation caused by the pandemic for the past two months and has spoken to experts.
“India needs to prepare for the economic devastation,” he said.
Rahul called upon Congress workers to help people and assist them in every manner possible.
“Congress needs to act as a watchdog. We need to ensure that the most vulnerable and the poor are protected comprehensively. Also, let’s take the message that we need to take special care of our senior citizens and elders,” he said.
He further said COVID-19 particularly attacks aged persons, people with lung disease, diabetics, persons with heart disease, making them most vulnerable and “all State Governments need to issue special advisories for these categories and take care of them”.
AICC general secretary Priyanka Gandhi Vadra claimed Uttar Pradesh had faced the “maximum burnt” of “heart-rending” scenes of migrant labour returning home.
“People are now being quarantined in inhuman conditions and sprayed with insecticides,” she alleged, adding that instead of supporting those returning home, the police and administration in UP was “beating and roughing them up”.
“Our workers have assisted the labour with food and medicines,” she said.
Priyanka also said testing for COVID-19 remains the key to prevent it.
Former finance minister P Chidambaram said the government had not understood the “enormity” of the crisis completely.
“Congress should engage the government constantly, support it but point out the shortcomings,” he noted.
Leader of Opposition in Rajya Sabha Ghulam Nabi Azad, Leader of Congress in Lok Sabha Adhir Ranjan Choudhary and senior party leaders Mallikarjun Kharge and AK Antony also addressed the CWC meet through video conferencing.
Senior party leader Ahmed Patel said the Congress does support the government but must point out its shortcomings. “This is imperative to fight COVID-19. It’s a fact that media refuses to show suggestions but we can’t shed our responsibility,” he said.(PTI)