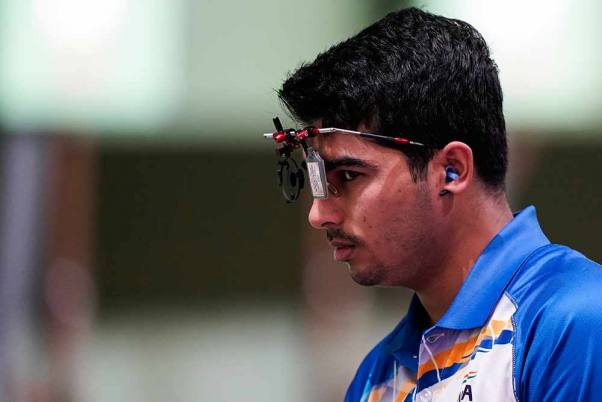 TOKYO [JAPAN]: Youngster Saurabh Chaudhary failed to rise to the challenge in the finals of the men’s 10m air rifle event as he finished seventh at the Tokyo Olympics.
Saurabh shot a total of 137.4 in the finals and as a result, he finished at the seventh spot. Riding high from his qualification round, the youngster would have been hopeful of winning a medal, but the final turned out to be a rather disappointing outing.
Earlier on Saturday, Saurabh had stormed into the medal round of the men’s 10m air rifle after finishing on top in the men’s 10m air rifle qualification, here at the Asaka Shooting Range on Saturday. On the other hand, Abhishek crashed out as he finished at the 17th spot with a score of 575.
Saurabh shot a series of 95 in the first series of men’s 10m pistol qualification. His first 10 shots were: 10, 10, 10, 10, 10, 9, 9, 9, 9, 9 and after this, he was positioned at the 17th spot.
Saurabh’s second 10 shots added up to 98 and hence he bettered his spot to 9th. In the third series, Saurabh once again put on a cumulative score of 98, and his rank rose further to fifth.
In the fourth series, Saurabh shot a perfect 10 and his rank got better to second, and he was going all guns blazing. In the fifth and sixth, Saurabh shot 98 and 97 and he finished with a total score of 586. (Agencies)