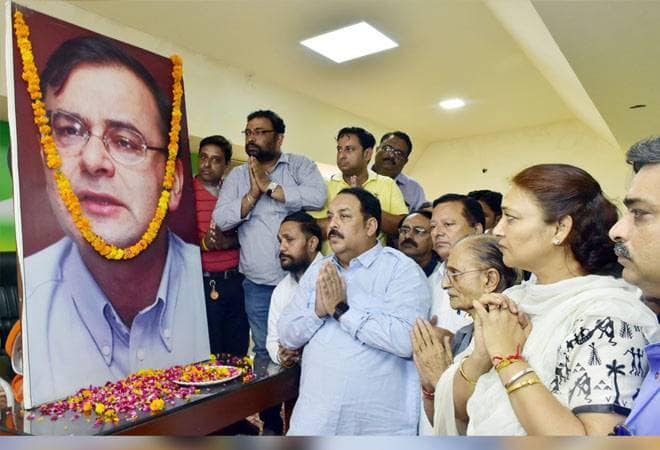 Wrapped in the national flag, the mortal remains were brought to the BJP headquarters on the Deen Dayal Upadhyaya Marg at around 11 AM from his Kailash Colony residence amid the chants of ‘Jaitley amar rahein’ (long live Jaitley).

The body was kept there for over 2.5 hours as a stream of mourners—from top leaders to common people including schoolchildren—filed past the body to pay their respects. Some of them overwhelmed with emotions as they had the last glimpse of the leader.

“Jaitley’s loss is irreparable. He will always be remembered for his contribution,” Harsh Vardhan said.

The body was taken to the Nigambodh Ghat on the banks of Yamuna, on a flower-decked gun carriage, for performing the last rites.

The 66-year-old passed away at the AIIMS here on Saturday. He was undergoing treatment at the hospital, where he was admitted on August 9.

Among others who paid their respects are Manipur Governor Najma Heptulla, Gujarat Chief Minister Vijay Rupani and Yoga Guru Ramdev.

Rupani said the BJP would seek his strategy whenever there was an election in the state.

“He has been a Rajya Sabha MP from Gujarat. We have won several elections in the state by working on his strategy. We will always feel his absence,” Rupani told reporters.

Slogans of “Jab tak suraj chand rahega Jaitley tera naam rahega” (Your name will endure as long as the Sun and the Moon exist)” and ‘Jaitley ji amar rahe’ (Long live Jaitley) reverberated around the hall.

Party workers remembered Jaitley as a leader who always helped them in need.

“I used to go to his house with a party leader. He was a very decent and friendly person who hardly said no to any request of help by party workers,” said Dildar Hussain, a BJP worker from the Jama Masjid area here.

Raj Kishore, a BJP worker from Jharkhand’s Giridih, waited outside the BJP office to pay homage to a “sober politician who never hurt anyone with his words or deeds”.

“His conduct and his manners were impeccable. I have heard several stories about how he helped ordinary party workers whenever they approached him,” Kishore said.

His sentiments found echo in several other party workers and leaders from across the country who thronged the BJP headquarters to see their beloved leader one last time.

Shah on Saturday said Jaitley was a crusader against corruption and credited him for the successful implementation of the GST and demonetisation, and taking the Jan Dhan Yojana to the masses. (AGENCIES)