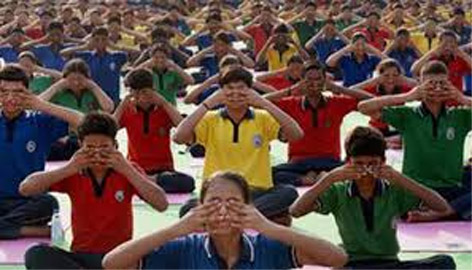 Houston, June 22: Thousands of American yoga enthusiasts rolled out their mats, twisting their bodies and performing ‘Surya Namaskar’ virtually, in the safety of their living rooms, back yards and terraces to commemorate the International Day of Yoga on Sunday.
The Consulate General of India, Houston, in collaboration with several supporting organizations and local yoga studios organized a virtual celebration of the event which was streamed live from India House.
“It is our pleasure to bring together a large number of diverse Houstonians, adjoining southern states under CGI, Houston, and institutions virtually for Yoga Day, to spread a message of peace, harmony and healthy benefits of Yoga amid the COVID-19 challenges.
“Yoga, an invaluable gift of India to the world, has the proven ability to help in dealing with stress and anxiety, strengthen our muscles and metabolism, and boost immunity through its various postures, ” Aseem R Mahajan, Consul General of India, said.
Yoga Guru Baba Ramdev led participants through a practice of ‘Simha Kriya’ to boost lung capacity during crisis.
“It is most important that we, as human beings, function at our best,” he said.
“This year, our effort has been to put together simple yoga modules that can be practiced at home by all individuals,” he said.
“You cannot afford to create a crisis within you.”
Yogic practices have the power to liberate people from this mindset and enhance the immune system, Baba Ramdev said.
“It is very important that we stay alive and stay physically and mentally healthy,” he said while demonstrating various ‘asanas’.
The virtual event, themed, “Yoga for health – Yoga from Home” had everything for yoga lovers right from demonstrations to collective yoga session for health, harmony and peace, consisting of ‘asanas’, ‘pranayama’ as well as meditation.
For the past several years, Houston, its adjoining cities and states have marked the International Day of Yoga on June 21 with a big public practice. However, during the age of social distancing, this summer’s celebration was taken indoors and through virtual interface.
“Life has dramatically changed for everyone,” said Shekhar Agrawal, president of Patanjali Yogpeeth USA, a charitable organization that aims to make the world disease-free through a scientific approach to yoga.
“These techniques are a powerful tool to help people tap into their inner calm as they deal with isolation, anxiety and stress due to the pandemic.”
International Yoga Day, which is celebrated on June 21 aims at raising awareness worldwide of various benefits of practicing yoga. The proposal was first introduced by Prime Minister Narendra Modi in his address during the opening of the 69th session of the General Assembly. (PTI)