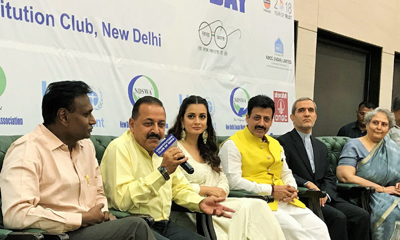 Excelsior Correspondent
NEW DELHI, June 3 : In a cryptic refrain, without naming anybody, Union Minister Dr Jitendra Singh said here today that those who advise India to exercise restrain and engage in talks with Pakistan, should first show the courage and conviction to advise Pakistan to stop cross – border shelling immediately and live up to the holy principles of Ramzan and Islam, which it professes to follow and which many of the Kashmir apologists within India also profess to follow.
The ideological and intellectual bankruptcy of these Kashmir apologists, he said, is evident from the fact that India, as a liberal democracy, allows them the freedom to offer unsolicited advice, which will never be welcome and may even be punishable in the authoritarian state of Pakistan.
Dr Jitendra Singh, who was responding to media queries on the sidelines of a function  here today, said, no amount of aggression on the borders will be able to deter India’s resolve to continue  with its determined crusade against Pak mischief on the border and Pak sponsored militancy in the Kashmir valley. He said, time is not far when Pakistan will come round to regret for its misadventure in Jammu & Kashmir.
Modi Government, said Dr Jitendra Singh, has a consistent and decisive strategy in place to deal with Pakistan, but the details of the same cannot be discussed in public.  However, the results will unfold, sooner than later, to the satisfaction of every Indian, he added.
Earlier, speaking at a panel discussion on the eve of “World Environment Day”, Dr Jitendra Singh said, the importance of India as a universal player for maintenance of environment is obvious from the fact that India has been entrusted with the responsibility of hosting “World Environment Day” of 2018, the theme of which is “Beat the Plastic”.
In a lively panel discussion, which included celebrity participants like Bollywood actress Diya Mirza, Member of Parliament Udit Raj and several foreign diplomats, Dr Jitendra Singh said, till a few years ago, India was in the fore-front of using alternatives to plastic  from natural sources and in a very hygienic way. He cited the example of South India where, till a few decades ago, it was a common practice in most of the households to serve food on fresh banana leaf and then dispose it of. Similarly, the yogurt was prepared in small earthen containers, from where it was directly consumed and then the container was disposed of.