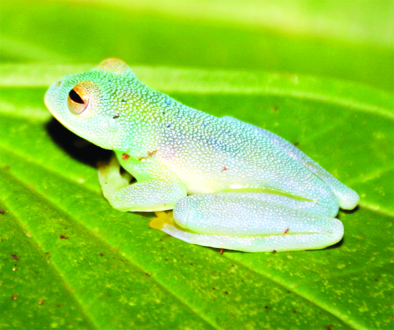 Mehak Khajuria
The mystery that why glass frogs have see-through skin has been unveiled. The earth’s biome homes a diversity of Flora and Fauna. The rich atmosphere harbors life and making it the only planet worth existing.
You may be wondering that we homo sapiens are the most fascinating creatures on land but fellow humans the truth will surely give you goosebumps. To date, there are around 8.7 million species of plants and animals that have been discovered so far and many more are still hiding in the large biomes ranging from the evergreen Amazon forests to the humid Sahara deserts.
This article describes the story of one such amazing amphibian whose morphology was a conundrum to the scientists (not anymore)even after its discovery.
Fact file
Hyalinobatrachium valerioi (commonly called the glass frogs) are mostly arboreal and found in forests of Central and South America further expanding to the evergreen forest of the Amazon.
These are carnivores, feeding on small insects and sometimes on other species of frogs too.
They show parental care(usually males) as they lay eggs near stones close to the waterfalls.
The morphology of this frog is quite unique as the dorsal side is green like other normal frog species but the ventral side is transparent or translucent (mostly).
So, it is evident that the internal organs such as GIT (gastrointestinal tract), heart, and the liver become visible once it hops or leisurely enjoys basking in the hot sun and hence contributing to its famous name as “Glass frog.”
But why this species of frog represent such a typical morphology even had the scientists bewildered for many years?
Sometimes not all complex things demand a complex solution. The art is, if you know the science behind the process of catabolism then you are on the right track. The same definition applies to this above-mentioned exotic species of frog as the coloration is just a type of camouflage mechanism.
Writing in the US journal Proceedings of the National Academy of Sciences, Barnett and colleagues report the exact cause of the coloration of the frog.
The below information is taken from The Guardian magazine.
According to a study conducted by a group of scientists (reference is taken from The Guardian Magazine)— “The frog is always green to generally match leaves, but leaves will differ in their brightness,” said Barnett. The team further adds that the legs are more translucent and not purely transparent and hence shift in brightness, helping the amphibians to blend in with the environment.
“By having translucent legs and resting with the legs surrounding the body, the frog’s edge is transformed into a softer, less contrasting gradient from the leaf to the legs, and again from the legs to the body,” said Barnett.
Also, recently the scientists have genetically engineered the glass frog in labs which is a revolutionary step as prior to this dissection was an ethical issue. But now due to their see-through skin, they are easily able to observe the internal organs without performing any dissection.
Rapid question-
Can you keep it as a pet?
They can actually be your pet (Even if they never nod in affirmation to be one). But since you will be taking care of a rare species then you have to provide some rare or special conditions for them to feel at home.