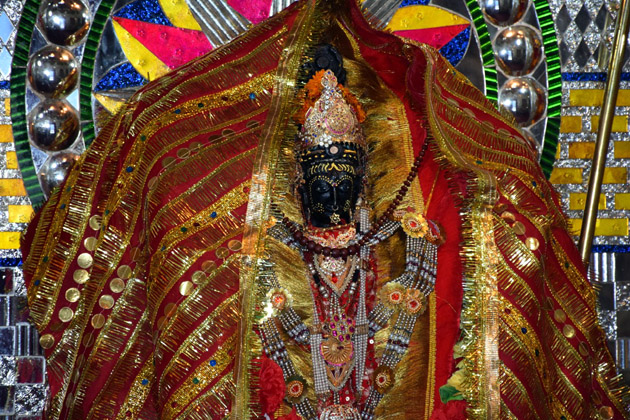 Er J R Aryan
District Kishtwar, the 3rd largest District in area after  Leh and Kargil is full of forest wealth, natural resources, power potential and mineral wealth, vast tourist potential and historical places. Amidst all the above the district has a unique distinction with a special feather in its cap in respect of having many famous religious shrines of almost all religions, which are thronged by lakhs of devotees every year to get the blessings and solace after      paying their obeisance. One among these shrines is the shrine of Sarthal Devi.
“Ashta-Dash-Bhuja Mata’ an incarnation of Mata Durga has been the Chief Deity of the Hindus of Kishtwar and its adjacent areas from ancient time. The holy temple in the present form was got constructed by Maharaja Hari Singh in 1936-37 from the proceeds of the timber extracted from Dayalwan and Deviyun-Vun. The  sacred temple of Mata is located at Sarthal which is 30 km from Kishtwar town connected by a vehicular road which takes off from Hasti from the NH-1B 11 kms ahead of Kishtwar town. The holy shrine is at an altitude of about 6000 feet, surrounded by beautiful mountains ranges, lush green fields, vegetation and charming surroundings. The holy site has a cluster of villages and habitations like Agral, Sarthal proper, Lawa, Karool etc in the neighbourhood having a good population. A Higher Secondary school, a Middle School and many other offices of other departments are located there. Thousands of yatries from different parts of the State throng the whole shrine almost throughout the year to pay their obeisance and get the blessings of Mata for their well being and prosperity. Whatever one prays has never been found un-rewarded. So the people have an enormous faith in the mother deity. Many people proceed to holy shrine in the form of a big religious processions like Yatra with large number of their kiths and kins, friends and relatives, chanting and reciting bhajans  amidst beating drums and allied music to offer their prayers to the holy Goddess during the ceremonies of 1st hair cut of their children/babies or for fulfilling their oaths having made earlier to have blessing of Mata. For such occasions, the Yatra or function lasts for 2 to 3 days. Sometimes such yatras are in dozens at a time when entire shrine complex gets flooded by yatries and people, and there is a great hustle and bustle and hectic activity which thrills one and all.
The month of July every year witnesses heavy rush and excitement of yatries, pilgrims and devotees who come in streams to visit the shrine to get the blessings, as it is in this month when Sarthal Devi Management Committee Kishtwar under “Dharamarth Trust Jammu’’ organizes a Shoba Yatra with Holy Mace on Harshudi Saptami (7th day of bright fortnight of “Ashaar Month) which starts from Shri Gouri Shanker Temple Sarkoot Kishtwar and goes upto holy shrine of Mata Sarthal Devi Ji with great pomp and show and religious fervor in the shape of a huge procession in which thousands of devotees participate chanting religious slogans, Bhajans with musical arrangements. The yatra leaves Kishtwar on all types of available vehicles.
During Dogra rule this Yatra was declared as “Sarkari Yatra’’. Three days holidays were announced for the entire erstwhile Distt Doda on  the religious festival. At the holy shrine of the Goddess, Yagya, Pooja and Havans amidst chanting of Vedic Mantras, Shalokas, Bhajan is performed on “Harshudhi Asthami’’ with other religious ceremonies as per the rituals and with “Puran Ahaooti’’ on the last day. Also Kirtan and Jagrata is performed at the shrine. Langar is also arranged at the complex.
At the holy shrine complex necessary arrangement are made for lodging and boarding of thousands of yatries in the existing Guest Houses and Dharamshallas. But more accommodation for lodging and boarding is required to  be made available by the Trust by constructing more huts and rooms, as the number of yatries and devotees is on the rise day by  day and year after year due to the Mata blessings and growing faith among people.
Even the Muslim Rajas of Kishtwar used to take the holy mace to Sarthal on the prescribed day with great reverence and organizing langar there.
It is true that the religious and historical, Archeological and Natural spots provide a great treasure, substance and potential for exposure of Tourism of any region, zone or place. District Kishtwar is blessed with all the above wealth which requires to be exploited, explored and exposed on the Tourist maps by the Government.
The writer makes an appeal to the Chief  Minister,  Mehbooba Mufti to take a decision for boosting tourism potential of this hilly District by bringing the various tourist spots, historical and religious shrines on Tourist Map and under Tourism Department.
It won’t be short of a boon if in the Ist instance the famous holy religious shrines of Mata Sarthal Devi Ji, the holy shrine of Shah Asrar-ud-Din Saheb and Shah Farid-ud-Din Saheb at Kishtwar and the sacred shrine of Mata Chandi Ji at Machail Padder together with Gumpas near Machail are brought on tourist maps and put under Tourism Department the way it has been done in respect of Holy shrine at Shiv Khori in Reasi Distt. Last but not the least, Air-service to Distt H Q Kishtwar, the overdue, as well as the dire need of the time for which there is an ample scope, be got started at the earliest.