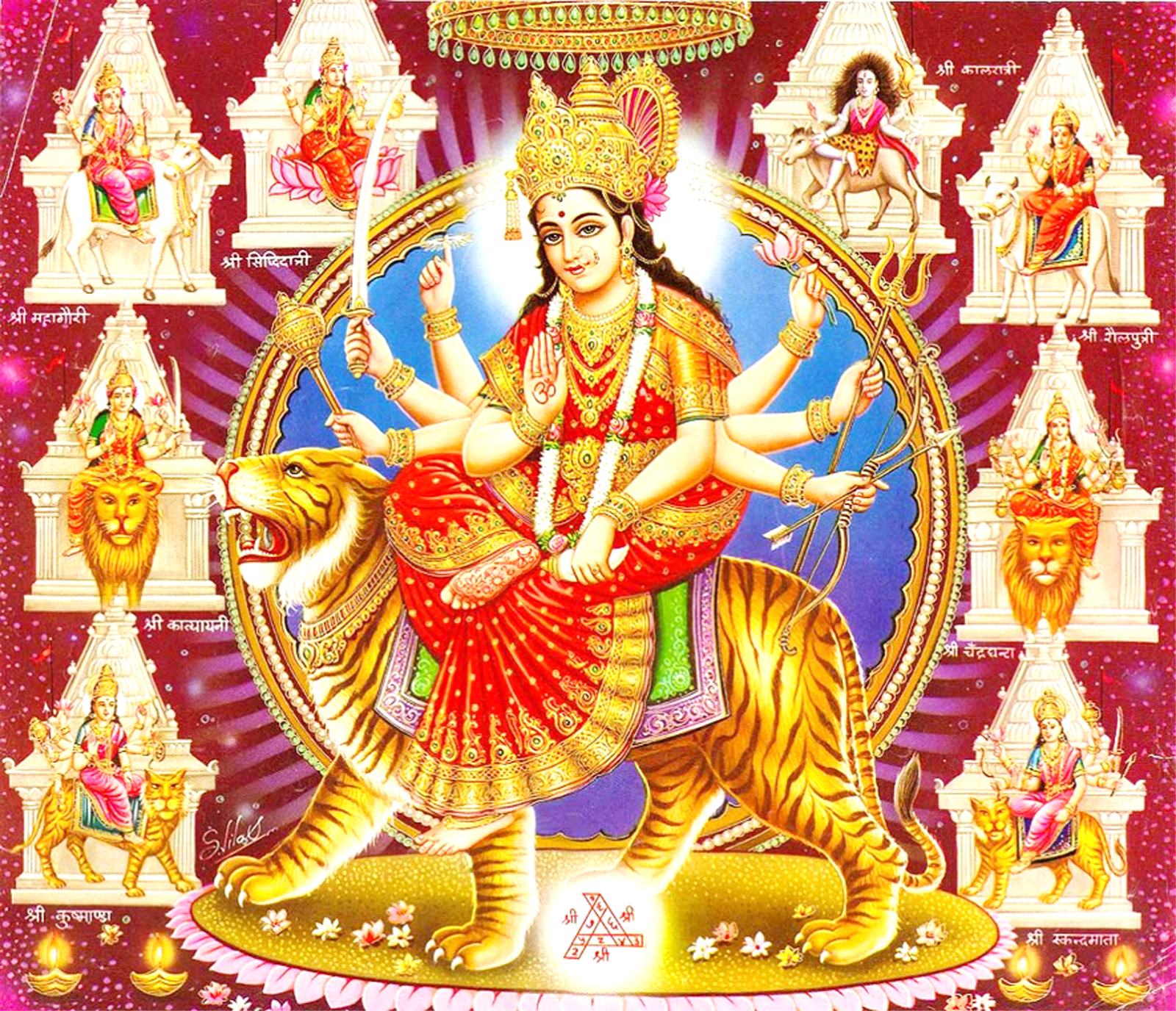 Navratri is the sacred and joyous          festival of the Hindu community of India. Observed over a period of nine nights, the festival is famous almost throughout the country for its religious and social importance. It is devoted to the worship of the divine Mother in  various forms under different names by different        people.
Like any other Hindu festival, Navratri has a spiritual message for its observers. This nine-day festival celebrates the triumph of good over evil and exhorts mankind to wake up from the slumber of ignorance, remove all negativities, purify the mind and cultivate positive virtues. This alone can help one gain the necessary spiritual knowledge to transcend all earthly limitations and achieve salvation – the highest goal of human life. This in fact, is the underlying theme of the whole of the Vedas (the ancient Hindu religious texts).
Nava means “nine” and “ratri” means night. During the nine-night long festival of Navratri the supreme female cosmic power or Goddess Shakti is worshipped in her variously manifested forms as Durga, Laxmi and Saraswati. All three Goddess are the incarnations of Goddess Shakti (the Mother Goddess). The festival signifies power, wealth, prosperity and knowledge.
The festival of Navratri begins on the first day of Ashwin of the bright fortnight. On the first three nights Durga is invoked for her strength and ferocity which are required to cut out from the mind it’s strong rooted, deep-seated negative tendencies. Noble virtues and the knowledge of self can only be gained when all evil tendencies in the mind are destroyed. The killing of Mahishashura (Mahisha demon) by Durga Devi actually symbolizes the destruction of the evil tendencies of the mind. To destroy our innate evil tendencies is very difficult. The buffalo stands for the malefic qualities in everyone of us. It reminds us that despite having a lot of energy and potential inside us, we prefer to do nothing for our spiritual emancipation.  Just like the buffalo that likes to lie in pools of water, we too like to rest and spend our time and energy in worthless pastimes. Our worship of Goddess Durga during the first three nights of Navaratri is actually our invocation to the Divine Power within us to assist us in destroying our animalistic tendencies.
On the next three nights, Goddess Laxmi is worshipped. For the knowledge of self-realization to dawn on us, we have to first prepare our minds. Our worship of Goddess Lakshmi is actually our attempt to seek the blessings of the divine being to help us in obtaining the purification of mind. Goddess Lakshmi represents wealth that we assume to be only material wealth. But material wealth is needed only in this world and without self discipline, respect, sincerity, kindness and love, wealth can make our life miserable. The real wealth is the spiritual wealth that we can gain by the practice of the right values in our lives, which purifies our minds and takes us closer towards self-realization. Goddess Lakshmi is our source of this true wealth. By our worship, we invite her to bring into our homes her wealth of noble values to nourish and purify our minds.
The final three nights are spent in the invocation of Goddess Saraswati. Victory over the mind can be gained only through the proper knowledge and thorough understanding; Goddess Saraswati symbolizes this highest knowledge of the Self. Lord Krishna himself says in the Bhagavad Gita: “The knowledge of the Self is the knowledge”; and He adds, “It is My vibhuti, My glory.” If we do not have the knowledge of the Self, then our knowledge of all other subjects has no real worth. The knowledge of the Self that is represented by Goddess Saraswati.
During Navratri, the Rasa (dance of joy) of Shree Krishna and the Gopis is also enacted. This dance symbolizes the dance of Realisation which represents the joy and happiness of the mind that becomes purer and calmer due to a greater understanding of the nature of the Inner Self.
The Ninth day of Navaratri is celebrated as Ayudha pooja which has a special significance. It is held to be the time when the Pandava brothers retrieved their weapons that they had stashed in a Shami tree during the last year of their 13 year exile. On this day, all articles that are used for progress and prosperity of mankind are worshipped. People worship their work-tools, household appliances and their vehicles on this day.
The festival concludes in Dusshera or Vijayadasami. According to popular belief, Dussehra celebrates the victory of Goddess Durga over the wicked demon Mahishasura who, according to legend, belonged to Mysore. It is also believed that the festival actually commemorates the killing of the great demon king of Lanka, Ravan, by Lord Rama. Both Mahishasura and Ravan are demons and their execution is a symbol of the destruction of the evil that resides within our mind. Navaratri represents the triumph of good over evil.
Courtesy :http://www.theholidayspot.com