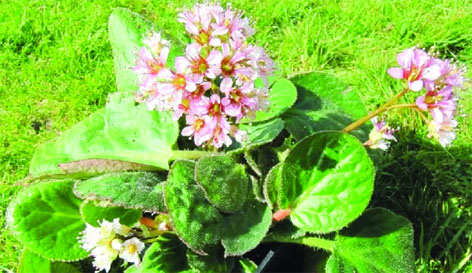 Dr. Vikas Sharma, Insha Rasool
Bergenia ciliate, is known as Paashanbheda (Paashan= rockstone, bheda = piercing) in Hindi and rock-foil in English which itself indicates that the Bergenia plants grow between rocks and appears to break them which bestows them with lithotriptic (causing destruction of bladder stones) property. The name Zakhm-e-hayat is attributed (in urdu) to its wound healing activity.
Zakhm-e-hayat is used in traditional Ayurvedic medicine for the treatment of several diseases in Nepal, India, Pakistan, Bhutan and some other countries. All species of Bergenia are reported to dissolve gravel and stone in kidney and used as an anti-urolithiatic. The antilithiatic activity of Bergenia is due to its active compound bergenin which has high dissolving activity of calcium stones. It is called Patharkuchi in Assamese and Patharchuri in Bengali. It is commonly known as hairy bergenia, a perennial herb found between the heights of 800 – 3000 m throughout the temperate Himalayas from Afghanistan to Southeast Tibet. In India, it is reported from Lushaihills, West Bengal, Arunachal Pradesh, Meghalaya, Himalayas (Kumaon), Kyongnosla, Karponanag, Gangtok in Sikkim and Almora in Uttarakhand. In Pakistan, it is distributed in northern parts mainly FATA region of Khyber Pukhtunkhwa Province, Poonch Valley, Swat, Abbottabad, Galliyat and Chitral. It is considered as a miracle herb because it is used to cure several diseases viz., gastrointestinal problems, kidney stones, malaria etc.
Phytochemistry and Biological Activity
Bergenia ciliate contains a number of important phytochemicals such as bergenin, gallic acid, catechin, paashanolactone, sitoindoside, quercitin, afzelechin etc. Presence of tannic acid, albumen, mucilage, glucose, wax, metarbin and mineral salts is also reported. The bio analysis revealed that this plant showed antioxidant, anti-inflammatory, antitussive, antiviral, antiulcer, anti-diabetic and toxicological activities. Rhizome of B. ciliata was found to show narrow spectrum of antibacterial activity, leaves and roots showed antifungal activity. It was long since this plant has been used as medicine for the treatment of different human ailments.
Traditional use of rhizome and root
In the traditional system of medicine, the rhizome is used fresh or in dried powdered form. It is used orally, simply chewed if fresh, for curing diarrhoea and during vomiting. It is also reportedly used against fever, cough, pulmonary infections and lung diseases Powdered rhizome is sprinkled over ulcers for quick healing and also applied to wounds for rapid healing. The rhizome powder is mixed with oil is rubbed on skin to heal fractures. The rhizome of B. ciliata has been taken orally by human adults as an anthelmintic and the juice of the rhizome has also been taken orally to relieve intermittent fever (malaria). Root is used as a tonic, in fever, diarrhoea and pulmonary affections and as an anti-scorbutic and in ophthalmia. In Kashmir, Zakhm-e-hayat has been reported to be applied in the eye diseases, boils, cuts, burns and bruises. One teaspoonful of the juice of dried rhizome of B. ciliata along with an equal amount of honey has been taken orally 2-3 times a day by post-partum-women, against the digestive disorders as carminative and tonic as well. This preparation, however, was prescribed at least a week or longer for bearing build up. In North West and Trans-Himalayan region in Jammu and Kashmir UT, the roots of B. ciliata are boiled in water and table salt is added in the decoction. Traditionally, this decoction is taken orally by human adults of this region for the treatment of asthma. The juice of the leaves of B. ciliata is used for ear ache. The juice of the rhizome of B. ciliata is used as an anti-tussive for cold and cough by the local people of the Sikkim and Darjeeling districts of West Bengal. Bhattarai, in his studies has reported that a prescription when prepared by boiling the crushed rhizome of B. ciliata in water and approximately 10 to 15 ml juice of this resultant preparation is diluted with water and when given to human adults thrice a day for 3-5 days, it was found effective for the treatment of chronic dysentery The authors further mentioned that its decoction is also taken orally by the human adults, as antipyretic.
CSIR-Indian Institute of Integrative Medicine (IIIM), Jammu has developed a Bergen in based anti-inflammatory and anti-arthritis drug IIIM-160 (9.1% w/w), with dual activity of IL-6 inhibition and antinociception making it suitable for treating rheumatoid arthritis. In recent times, the old traditional practices are gradually declining very rapidly and are under risk due to rapid modernization. Hence, there is an urgent need for documentation of such tribal species and to find innovative ways to tap its efficiency for human welfare in future. The present article is an attempt to inform people about the preservation of this miracle herb, Bergenia ciliata, which is of considerable medicinal importance.
(The authors are from Division of Biochemistry, FBSc., SKUAST-J)