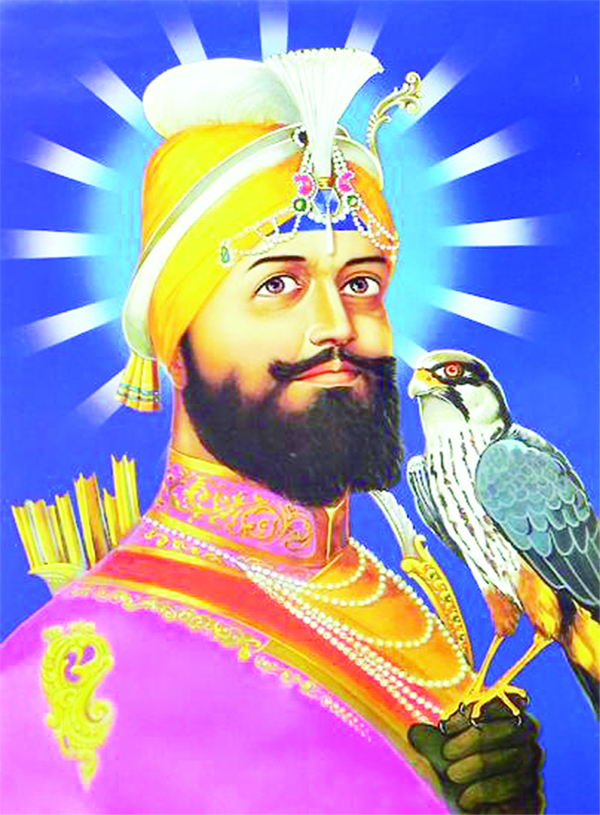 Inder Jeet S. Bhatia “Prince”
Guru Gobind Singh Ji, the 10th master of the Sikhism, the founder of the ‘Khalsa Panth’ (The pure ones) , was born in 1666 A.D, in the ancient city of Patliputra, now called “Patna Sahib”, Bihar. Guru Ji was a spiritual master, warrior, poet and a philosopher. When Guru Tegh Bahadur ji, the 9th Sikh Guru and father of Guru Gobind Singh Ji (Then Gobind Rai Ji) was executed by Aurangzeb, Guru ji was formally installed as the leader of the Sikhs at the tender age of nine years. It so happened that a deputation of Kashmiri Pandits came to Anandpur Sahib and told the cruel acts of injustice of the Mughal Emperor Aurangzeb towards Hindu Community to Guru Tegh Bahadur Ji. Guru ji became silent and was absorbed in deep thoughts. At that time, Guru Gobind Rai Ji, a child of nine years old, asked his father the reason for his silence. Guru Tegh Bahadur Ji explained that these helpless people from Kashmir had no one to protect their religion. The sacrifice of a great and brave soul was needed. Guru Gobind Rai ji immediately said, “Who can be greater and brave than you? Please do whatever is necessary to redress their grievances and save Hindu religion”
Guru Tegh Bahadur Ji was pleased to hear this. He told Kashmiri Pandits to inform the Emperor that instead of coercing so many Hindus, the ruler should convert ‘Guru Ji’ to Islam and then all Hindus would automatically adopt ‘Islam’
The Emperor was angered. He summoned Guru Tegh Bahadur Ji to Delhi. Guru Ji was beheaded on November 11, 1675 in the presence of thousands of people in Chandni Chowk area of Delhi , when Guru Tegh Bahadur Ji refused to accept ‘Islam’. Gurudwara “Sis – Ganj Sahib” stands today at Chandni Chowk Delhi today as a memorial of Great Guru Ji. Thus , Guru Gobind Singh Ji ( Gobind Rai Ji, then) was chosen as 10th master of Sikhs and the great responsibility of directing the affairs of the Sikh faith fell on his shoulders.
The frustrated Emperor having failed to crush the sikh movement by continuously harassing Sikh Gurus, now had ordered his army to march on the SIKHS in an attempt to finish them from the face of Earth.
Sikhs had to be prepared to face the challenge. Guru Gobind Singh Ji, as the first step, decided to consolidate resources and man power. Sikhs were invited to Anandpur Sahib and were given training in martial arts. Guru Gobind Singh Ji created “KHALSA” in 1699 A.D. at Anand Pur Sahib on Baisakhi Day. With the “KHALSA” as the guiding spirit of the reconstituted SIKH army, Dashmesh Pita, told his followers,”Dev Siva Bar mohe eh- hey Subh Karman Te Kabhu na taro. Na daro arr seo Jab Jaye Laro Nischey kar apni jit Karo. Arr Sikh ho apne he mann ko, eh laalach hou gun tau ucharo. Jab aav ki audh nidan bane att he rann me tabh joojh maro II. This means Dear God, grant my request so that I may never deviate from doing good deeds. That, I shall have no fear of the enemy when I go into battle and with determination I will be victorious. That, I may reach my mind to only sing your praises. And when the time comes, I should die fight heroically on the field of battle. Thus, Guru Gobind Singh Ji moved against the tyrant Mughal rulers. His “Khalsa” was totally committed to the Sikh ideals willing to sacrifice everything in the cause of Sikh religion and political freedom. Guru Gobind Singh Ji paid a heavy price for this struggle. He sacrificed his four sons and his wife, his father and his mother as well!
Though a matchless warrior, Guru Gobind Singh Ji always remained a saint at heart. Guru Ji had dedicated himself to GOD. Guru ji was GOD intoxicated philosopher who wanted to see all man made differences created by barriers of formal religion and social distinctions brought in by caste to be obliterated from society. Guru ji was a linguist familiar with Persian, Arabic and Sanskrit as well as his native Punjabi language.
He wrote many religious books. Guru Ji was assassinated by two pathans allegedly sent by Nawab of Sirhind. Guru ji breathed his last at the age of 47 in 1708 at Nanded Sahib, where Gurudwara, “Sachkhand Huzur Sahib” Avichal Nagar (in Maharastra) is situated. Guru Ji proclaimed , before his end that he was the last of the personal Gurus of the SIKHS. From that time onwards, the Sikh Guru was to be the Holy Book, ” The Adi Granth Saheb Ji”
feedbackexcelsior@gmail.com

Inspectors of J&K Police: Victim of Official Apathy and Humiliation

Compassionate Appointment — Are we doing Justice to our Heroes