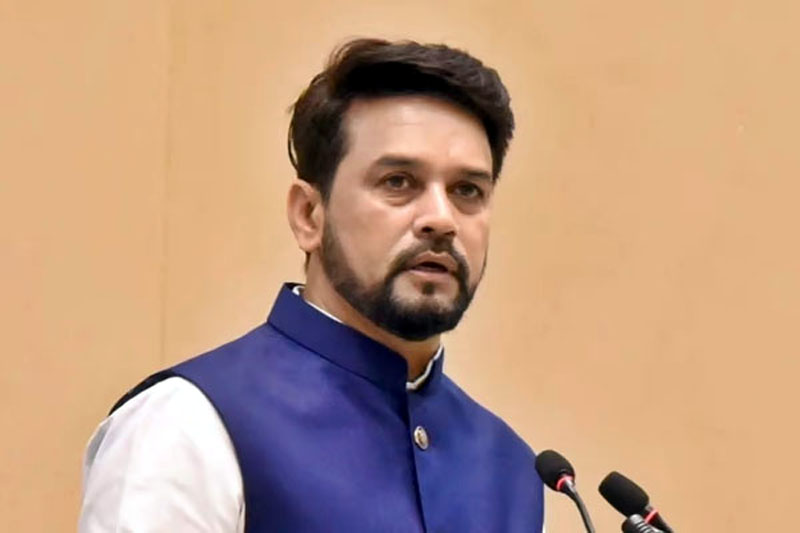 NEW DELHI, May 17 : Information and Broadcasting Minister Anurag Thakur is in France to attend the Cannes Film Festival, where India has been named as the ‘country of honour’ for ‘Marche du Film’, the business counterpart of the marquee event.
Thakur was received by India’s Ambassador to France Jawed Ashraf on Tuesday.
He is set to walk the red carpet at the festival this evening, besides meeting Charles H Rivkin, chairman and chief executive officer of Motion Pictures Association of America (MPAA) and Stan McCoy, president of Europe, the Middle East and Africa of the MPAA.
Thakur will lead the Indian delegation comprising top personalities including Shekhar Kapur, A R Rahman, Prasoon Joshi, R Madhavan, Tamannaah Bhatia, Vani Tripathi, Pooja Hegde and folk artist Mame Khan for the red carpet event ahead of the screening of opening film “Coupez” (Final Cut) by Michel Hazanavicius.
“This will be the biggest Indian contingent to walk on the Cannes red carpet ever,” an I&B Ministry official said.
On Wednesday, Thakur will inaugurate the India Pavilion at the business event alongside the Cannes Film Festival and participate in the opening night festivities of Marche Du Film at the Majestic Beach.
As one of the highlights of India’s status as the ‘country of honour’, a special screening of a restored Indian classic “Pratidwandi”, directed by Satyajit Ray, has been planned as part of the festival’s Cannes Classics selection.
In addition, world premieres of a selection of Indian films will be held at the Olympia Cinema.
India will be showcasing five movies – “Baghjan” (Assamese) by Jaicheng Zxai Dohutia, “Bailadila” (Chhattisgarhi) by Shailendra Sahu, “Ek Jagah Apni” (Hindi) by Ektara collective, “Follower” (Marathi) by Harshad Nalawde and “Shivamma” (Kannada) by Jai Shankar – under the “Goes to Cannes Section”.
These movies are part of the ‘Work In Progress’ lab under the Film Bazaar.
R Madhavan’s film, “Rocketry: The Nambi Effect”, will have its world premiere at the festival on May 19. (PTI)