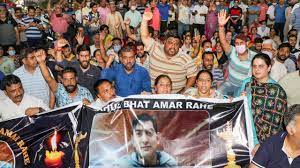 The security apparatus dealing with the most challenging task of fighting militancy and related ever changing strategy of acts of violence by militants in Kashmir valley at the behest of their mentors from across the border, are undoubtedly doing their best with tremendous efforts and almost frequently suffering damages of irretrievable hues too or in simpler words, offering their supreme sacrifice for the safety and security of the people of Jammu and Kashmir. Not that, they lack in any way, the professional acumen in dealing with so to say the elusive enemy but since the enemy is in camouflage and does not gather the cheeks to come out in the open but on the contrary, at times, uses even innocent human shields as cover and to save their lives , the counter operations have to be conducted in a way that no collateral damages took place and it is here where the prejudiced armed cowards take the advantage. Daring recently to enter the office of the Tehsildar in Budgam, Kashmir in broad daylight and first asking for the identity of their victim by name, they straightaway shot the employee at point blank range while he was on his seat doing his official work which is reminiscent of 1990 conditions in Kashmir when a Deputy Director of Food Supplies in Srinagar was shot dead in his office in the same way during busy working hours.
Revisiting of that tactics is an open challenge to the prevailing system of vulnerable ”internal” security system where the attention of the police authorities has proved to be quite faltering and found wanting in affectivity. That is quite unfortunate and is fraught with downing the overall morale of the security forces since such a satanically and mischievously hatched plan to kill the victim of the community bulk of which has already left the valley way back in 1990 following the unprecedented sway of Pakistan sponsored terrorism in the otherwise most peaceful valley, overshadows the hard work otherwise being done in taking on these ”militants” quite frequently by our security forces . And when peaceful protests of the employees and their relatives took place in various parts of the valley which is their democratic right under the constitution of the country, they were brutally lathi charged and rained with tear gas shells, many suffering injuries in the process while a few among them including females were arrested . Not only that as to why was there such a security breach in the office of the Tehsildar or the Executive Magistrate and the terrorists managed a cakewalk up to the victim , killing him on the spot and walking back quite leisurely, speaks volumes of cause and effect and therefore, not only those Police authorities should be asked to explain and account for unprovoked, undeserved and unjustified use of force against mourning peaceful protesters but also whether there was a nexus between some insiders and the ”militants” so as to have such a dastardly killing of an innocent carried out so meticulously.
The absurdity and rubbishy about ”justifying” killing the victim by the assassins’ outfit is again their daring attempt to mock the system and project utter heartlessness and loss of human and moral values let alone least bothering about committing religious sins. This time levelling whatever imaginary ”charge” is in contrast to what was the ”crime” of Bindroo, the medical shop owner, the female Sikh teacher and her colleague a Hindu teacher hailing from Jammu . Even if one had some political affiliation or pursued some faith who gives authority to anyone to straightaway take the victim’s life need to be asked by the general public who can wield considerable influence to isolate , condemn and ostracise such abominable elements. So, the strategy of tackling such a dangerously conceived, planned and executed ”blueprint” to spread scare in the minority communities in Kashmir should be taken as a national challenge and an all out offensive should be launched against the heartless inhuman killers. It would , therefore, be in the fitness of things that various security related measures were taken in respect of package employees working in Kashmir valley including their foolproof staying arrangements.
Appearing to be on the pursuit of upping their diabolical aim of spilling innocents’ blood , armed militants also shot dead a young police man right at his residence in Pulwama, Kashmir on Friday while the migrant employee was killed on Thursday in Chadoora, Budgam or a second attack within 24 hours which claimed two innocent lives and virtually devastated two families. Jammu and Kashmir Police have been offering supreme sacrifice from time to time while discharging their duties and it becomes bounden duty of the UT Government to take full care of their families. Such inhuman killers deserve severest action as fast as possible in order to restore the confidence of the people in the system. We are conscious of the fact that the UT Government in cooperation with the central Government is trying to restore complete normalcy in the UT of Jammu and Kashmir as also giving numerous developmental projects a great push but Pakistan sponsored terrorism has been and still continues causing lot of trouble which needs to be taken serious note of.