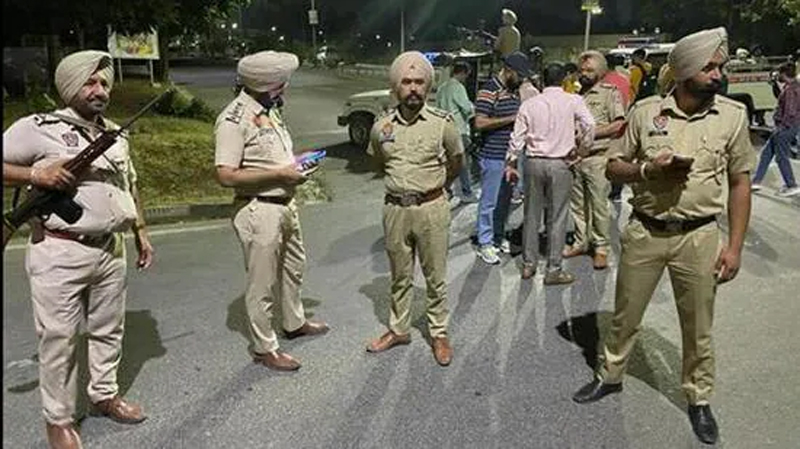 CHANDIGARH, Sept 23:
The Punjab Police today claimed to have busted an ISI-backed terror module jointly handled by Canada-based gangster Lakhbir Singh alias Landa and Pakistan-based gangster Harvinder Singh Rinda with the arrest of two of its operatives.
Lakhbir Singh is considered to be a close aide of Harvinder Singh, who had joined hands with Babbar Khalsa International (BKI), and the duo has close ties with the ISI, a Punjab Police statement said here.
Lakhbir Singh had played a key role in planning the rocket propelled grenade (RPG) attack at Punjab Police Intelligence Headquarters in Mohali in May and planting of an Improvised Explosive Device under the car of Sub Inspector Dilbag Singh parked outside his residence in Amritsar on August 16.
Punjab Police today arrested Yuvraj Sabharwal alias Yash who had planted the explosive device on the directions of Lakhbir Singh, the statement said. Sabharwal is the eighth accused nabbed in the case.
According to police, the arrested operatives have been identified as Baljit Singh Malhi (25) of Jogewal village and Gurbaksh Singh alias Gora Sandhu of Buh Gujran village in Ferozepur.
An FIR was registered under the provisions of the Unlawful Activities (Prevention) Act and Arms Act at the State Special Operation Cell at Amritsar, police said.
Punjab Director General of Police Gaurav Yadav said in an operation led by Additional Inspector General (counter intelligence), Jalandhar, Navjot Singh Mahal, police teams arrested the duo and seized one AK-56 assault rifle along with two magazines, 90 cartridges and two bullet shells from a location pinpointed by Gurbaksh Singh at his village.
Yadav said preliminary investigations revealed that Malhi was in touch with Italy-based Harpreet Singh alias Happy Sanghera, and on latter’s directions, Baljit Singh had picked a consignment of weapons from Makhu-Lohian road in Sudan village in July 2022.
Later, they concealed the consignment in fields owned by Gurbaksh Singh after conducting test fires, he added.
The DGP said it has also been ascertained that Baljit Singh was in direct contact with gangsters, including Canada-based Lakhbir Landa and Arsh Dalla. Further investigations are on and more recoveries of weapons are expected soon, he added.
Yadav said the war against gangsters waged by Punjab Police on directions of Chief Minister Bhagwant Mann will continue till Punjab emerges as a gangster-free state.
According to Yadav, Sabharwal is a resident of Navi Abadi Faizpura and was arrested from Kullu in Himachal Pradesh. He is a history-sheeter and was involved in various heinous crimes, including attempt to murder, robbery and dacoity, Yadav said.
The DGP said along with Sabharwal, police have also arrested his two aides — Pawan Kumar alias Shiva Macchi and Sahil alias Macchi — both residents of Chamrang Road at Amritsar, who have criminal-backgrounds and are wanted by the Amritsar police in multiple other cases, including murder, snatching, robbery, and dacoity.
Both the accused were arrested in dacoity case registered at Police Station Majitha Road in Amritsar, while, their role in the IED case registered at Police Station Ranjit Avenue in Amritsar is also being examined, Yadav said.
The development comes weeks after the Punjab Police had arrested seven people, including Deepak (22) of village Patti in Tarn Taran, who accompanied Sabharwal in retrieving and planting the IED.
The mobile phone-triggered IED weighing about 2.79 kg and carrying about 2.17 kg of explosive was recovered from the spot by local police. (PTI)