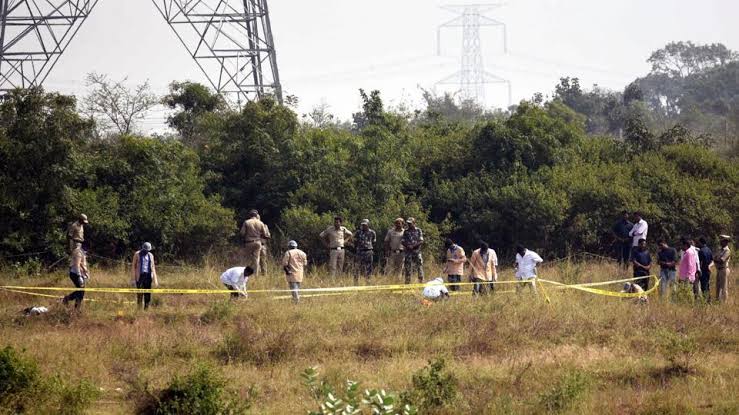 NEW DELHI: The Supreme Court appointed on Thursday a three-member inquiry commission headed by former apex court judge V S Sirpurkar to inquire into the circumstances leading to the encounter killing of the four accused in the gang-rape and murder of a veterinarian in Telangana.

A bench headed by Chief Justice S A Bobde stayed proceedings pending in the Telangana High Court and the National Human Rights Commission (NHRC) in the case and sought an SIT report into the case, saying no other authority shall inquire into the matter pending before the commission of inquiry till further orders.

The bench, also comprising Justice S A Nazeer and Justice Sanjiv Khanna, ordered that security to the three-member commission shall be provided by the Central Reserve Police Force (CRPF).

The top court said the six-month deadline for submission of the report by the commission shall start from the first day of hearing and it shall have all the power under the Commission of Inquiry Act for conducting inquiry into the December 6 encounter deaths.

The bench noted that “conflicting versions about the incident demands an inquiry to uncover the true facts”.

The bench also took into account the submission made by senior advocate Mukul Rohatgi appearing for the Telangana government that a Special Investigation Team of the state police headed by a police officer of the level of Commissioner of Police was also investigating into the incident and would submit its report.

The bench was told that the SIT was inquiring into the cause of death four person who were accused in the rape and murder of the veterinarian and FIR was lodged against them for attempting to kill police officials who had taken them to the spot where the woman’s charred body was found.

In its order, the bench noted that obviously even if the SIT conducted investigation and prosecution of the dead person, they can neither be tried or convicted.

The bench said, “We do not see how to certify the possibility of such a trial can ever uncover the truth relating to the incident in which policemen are said to have made an encounter and caused the death of four accused.”

“Therefore we are of considered view that inquiry commission needs to be constituted into inquiring the circumstances in which the four accused persons were killed in the morning in Hyderabad on December 6,” it said

At the outset the bench was of the view that there should be impartial inquiry into encounter deaths of the four accused.

Two petitions were filed in the Supreme Court, one by lawyers G S Mani and Pradeep Kumar Yadav, and the other by advocate M L Sharma, seeking independent investigation against the police officers concerned.

The PIL, filed by Mani and Yadav, claimed that the alleged encounter was “fake” and an FIR should be lodged against the police officers involved in the incident.

The Telangana Police had said that the accused were killed in an exchange of fire.

The incident took place around 6.30 am when the accused were taken to the site of offence for the reconstruction of the scene of crime as part of the investigation.

The four accused were shot dead on NH-44 near Hyderabad—the same highway where the charred body of 27-year-old veterinarian was found.

Mani and Yadav, in their PIL, said that no one would support the accused who are involved in gang rape and murder cases against innocent women.

“However, an investigating agency and officers even at high level like Commissioner of Police taking the law into their hand, conducting fake encounter and killing alleged rape accused…without bringing them before the court for punishment is very unfortunate,” the plea said.

“No one including the investigating agency like police has right to punish any accused without due process of law. The court alone after applying all the procedure and law and affording an opportunity all the right of free and fair trial and hearing can impose punishment of imprisonment or death sentence,” Mani and Yadav said in their PIL. (AGENCIES)