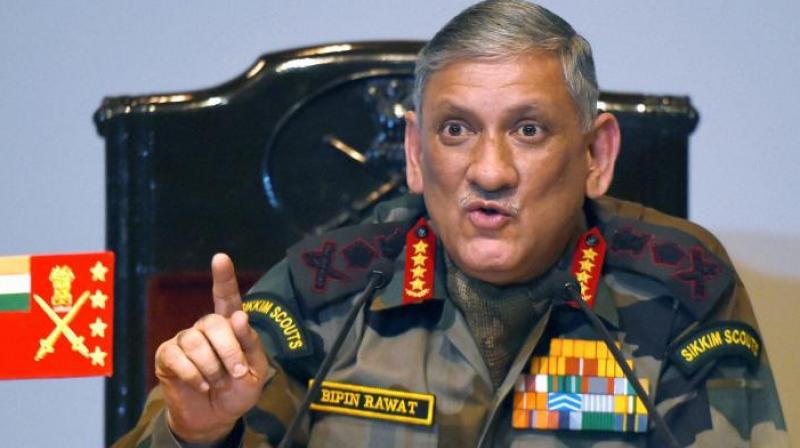 New Delhi: Army chief Gen. Bipin Rawat today stressed on exploiting cyber space for advantage of defence forces, saying the “tech-savvy” terrorists operating from across the borders are using it for their benefit and if the armed forces don’t stay ahead of them, they may never be able overcome terrorism.

“We must also develop niche capabilities to disable the adversaries’ system. Today, the terrorists operating against us from across the borders are very tech-savvy. They are exploiting cyber space for their advantage. If we don’t stay ahead of them, we will never be able to get over the phenomena of terrorism,” Rawat said.

He also noted that China is ramping up its capabilities in the cyber warfare.

Addressing the conference, Lt Gen Satish Dua, who is the Chief of Integrated Defence Staff to the Chairman, Chiefs of Staff Committee (CISC), said there was a need to tweak the defence strategy and factor in cyber threat.

“Radicalisation is the most potent by-product of cyber warfare. Terrorist organisations have moved their propaganda online,” Dua said.

Citing an example of Burhan Wani, whose killing in an encounter with the security forces in July 2016 led to an unrest in the Kashmir Valley, Dua said the Hizbul Mujahideen terrorist, was a creation of social media.

The 22-year-old Wani was a poster boy for militancy in the Valley.

“To overcome other inadequacies, they used this system (cyber space) very nicely. Social media was used to build a Robinhood kind of image of Burhan Wani and eventually when he was eliminated, we saw the kind of unrest in Kashmir, in the Valley…. (it) was unprecedented a couple of years ago. And all started with this creation of social media,” Dua said.

Prior to his current posting, Dua was General Officer Commanding of the Army’s strategic Chinar Corps (15 Corps) responsible for guarding the Line of Control in Kashmir. (Agencies)