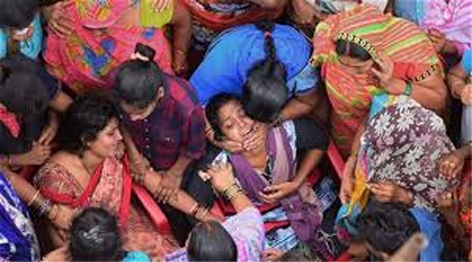 So, continuing with the brutal and cowardly killing of innocent people in Kashmir, the repeated clarion call to militants given by the top authorities of civil, police and security forces to shun senseless and aimless violence and join the mainstream seems to be knowingly and deliberately falling on deaf ears. That reconfirms and reiterates the resolve of civil and police authorities that anyone taking to the gun to spread terror, harm and kill deserves only to be killed. By killing in cold blood, the young Wasim Bari, the BJP leader in north Kashmir’s Bandipora district, his brother and his father- misled, misguided and bewildered but desperate militants are serving the cause of none but that of the Satan and are strengthening the resolve of many more prospective Wasims to emerge on the scene to nourish and strongly build up the structure of nationalism, peace, development and settle issues through the ballot and the constitutional and democratic institutions. It is quite shocking that the terrorists and their mentors should feel so much threatened and scared with more and more nationalist forces taking to the centre stage and coming forward in Kashmir that they think their ”riddance” by only in having them killed in cold blood. Cowards as these killers turn out to be, run away like frightened rats after killing unsuspecting and unarmed innocents and can best be described as namby-pamby people. The day, nay the moments, of their reckoning, have since started.
The killing of the three of a family having political leanings with the ruling national political party, the BJP comes on heels of a Kashmiri Pandit Sarpanch killed in cold blood only a month back who was having political affiliation with another national political party, the Congress which shows the diabolical move of the terrorists to silence nationalist forces in Kashmir and have no tolerance towards one’s freedom and liberty to follow a particular political party and its ideology. Such a design of theirs while being reminiscent of their ultimate doom, was leaving no scope for the Government for any type of leniency or any sort of reprieve for them but to make them face the rigours of law of the land for waging war against the state.
However, much more needs to be read into the killings by the weakling cowards as all fingers of suspicion of complicity in one or the other way, points to those security personnel on duty to provide them protection , who were conspicuous by their absence . That they were as many as 10 in number and all of them cannot be expected to be absent from the scene of the killings without planning and a motive as right inside the shop and outside their own house, the three were present where , with silencers fitted rifles , the terrorists killed the three of a single family. That, they are under detention could unravel the nuts and bolts of their connivance and involvement, at least, to the extent of leaving the pointed area of their duty, making vulnerability of the victims to all types of dangers , whom these were otherwise supposed to protect , should be deeply probed into but within quickest possible time and made to face the consequences. What tragedy can there be in more clumsy and ugly form than some black sheep donning the proud and dutiful uniform of security forces only to undermine and betray the trust reposed in them to remain committed to their duty, loyal to their country and respectful to their uniform. That the Prime Minister, the BJP national President, MoS PM’s office and many other political and social leaders have expressed deep anguish over the killing and extended deep condolences shows how serious such senseless killings are taken. While we express anguish and concern over crazy and inane killing, we hope an early end to it, sooner the better for all.