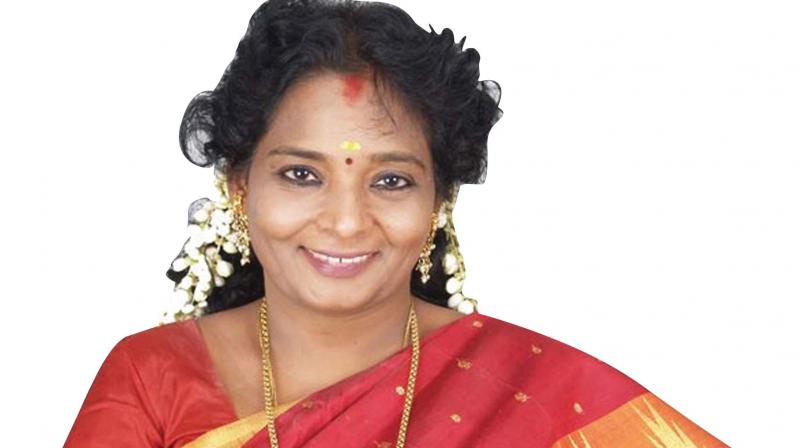 NEW DELHI, Sept 10: Tamilisai Soundararajan, who was on Sunday sworn in as the first woman Governor of Telangana, is the youngest among all state Governors, while Andhra Pradesh’s Biswa Bhusan Harichandan is the oldest at the age of 85.
The average age of Governors is 73 after the appointment of five new governors on September 1 by President Ram Nath Kovind.
Fifty-eight-year-old Soundararajan was the former Tamil Nadu BJP chief and the party’s national secretary.
On September 1, the president named her as the second Governor of Telangana which was formed on June 2, 2014. Earlier, the post was held by E S L Narasimhan.
She is the only Governor who is under 60 years of age. The second youngest governor is Acharya Devvrat, 60, who is serving as the governor of Gujarat since July this year.
The maximum number of the governors fall in the age group of 70-79.
Out of the 28 governors heading the Raj Bhavans of 29 states, one is below 60, seven are in their 60s, while 14 in their 70s. Six of them are in their 80s.
Jagdish Mukhi, 76, who is the Assam governor, is also the governor of Mizoram (additional charge) since March 8, 2019.
As many as 19 of them are the first time governors, while nine have previously been in the Raj Bhavans of other states. Six of the state governors are women.
Veteran BJP leader Harichandan, who was born on August 3, 1934, is the 23rd Governor of undivided Andhra Pradesh. Currently, he is the oldest Governor. Harichandan is the first Governor to be appointed exclusively for the state after the bifurcation. Earlier, Narasimhan was holding the charge of both Andhra Pradesh and Telangana after Andhra Pradesh was bifurcated in 2014.
Harichandan began his career as a lawyer in the Odisha High Court in 1961 and joined the then Bharatiya Jana Sangh in 1971.
He joined the BJP in 1980 when it was founded and became the president of the Odisha state unit. During Emergency, he was arrested under the Maintenance of Internal Security Act (MISA) in 1975 as he fought against suppression of judges in the Supreme Court.
Governor of Madhya Pradesh Lalji Tandon, 84, is the second senior-most governor after Harichandan. He was the Governor of Bihar before being moved to Madhya Pradesh in July. (PTI)