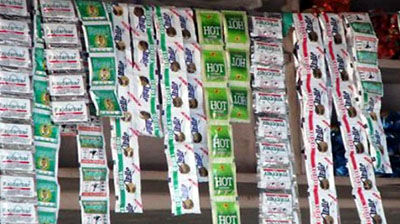 NEW DELHI, Sept 5: In a possible first, premises of a police chief in Tamil Nadu were among 40 locations searched by the Central Bureau of Investigation (CBI) Wednesday in connection with Gutka scam, officials said.
After registering a case in May, the CBI carried out searches at 35 places in Tamil Nadu and five places in Karnataka, Mumbai and Puducherry which included residential premises of Health Minister C Vijayabaskar, Tamil Nadu DGP T K Rajendran and former police commissioner S George in Chennai.
An Indian Revenue Services officer has also been raided by the CBI in connection with the case, the officials said.
This is possibly a rare incident when a serving Director General of Police of any state has been raided by the CBI.
A 1984-batch IPS officer, Rajendran was made Director General of Police in 2016 after Ashok Kumar opted out for a voluntary retirement scheme. Officials said that Kumar, a 1982 batch IPS officer, was forced to seek VRS as he had recommended for a CBI probe in the Gutka scam.
The scam came to light on July 8, 2017, when income tax sleuths raided the godown, offices and residences of a pan masala and gutka (a concoction of tobacco and pan masala) manufacturer in Tamil Nadu, who had been facing charges of tax evasion to the tune of Rs 250 crore.
The manufacture, storage and sale of the chewable forms of tobacco, including gutka and pan masala, were banned by the Tamil Nadu government in 2013.
During the raids, the department had seized a diary containing names of those who had been allegedly paid by the gutka manufacturers.
The case was sent to the CBI by the Madras High Court in April this year on the plea of a DMK leader.
This was challenged in the Supreme Court by a Tamil Nadu health official but the apex court sided with the order of Madras High Court and asked the agency to register a case.
The agency had registered an FIR against unidentified officials of the Tamil Nadu Government, Central Excise Department and the Food Safety Department in May. (PTI)