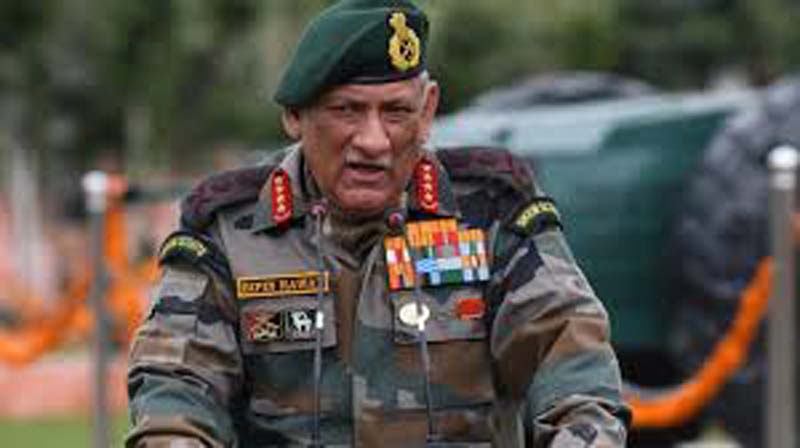 Excelsior Correspondent
JAMMU, Oct 26: Chief of Defence Staff (CDS) Gen Bipin Rawat is understood to have directed the three Services to suspend peace-time activities as this was not the normal situation as troops were engaged in bitter conflict with China in Eastern Ladakh and be ready in case of worse scenario.
The directions came at a time when the troops of Northern Command were engaged in bitter conflict with China’s Army in the Eastern Ladakh for over four months now and there were no signs of immediate easing of tension between the two hostile neighbours.
With no progress in talks between India and China, both at diplomatic as well as military level, sources told the Excelsior that Navy’s Marine Commandos (MARCOS) are also being deployed in the Eastern Ladakh to make the Indian Army further stronger in stand-off with the People’s Liberation Army (PLA).
Gen Bipin Rawat is reported to have asked the three Services to curb all peace-time activities in deference to deployed troops and be ready in case of a worst case scenario, sources said, adding the directions assumed significance due to heightened tension between India and China at the military level in the Eastern Ladakh where the troops of the two countries are engaged in eyeball-to-eyeball situation.
According to sources, Gen Rawat has made it clear to all the three Services that these are not normal times with troops as artillery and tanks have been deployed along the Line of Actual Control (LAC) in Eastern Ladakh. Therefore, he said, all peace-time activities must be curbed at this stage.
“As situation in Eastern Ladakh can get worse any time in case of an accident, the armed forces must be ready for any scenario. It cannot be that while the entire Northern Army Command and Western Air Command are battle deployed in frozen condition, the rest of us can’t be engaged in peace-time activities.
“Let nobody forget there is a war-like situation in Eastern Ladakh,” sources said, adding that the directions have also gone to the troops to be in battle readiness mode in view of no major headway in several rounds of Lieutenant General-level talks between India and China.
It is understood that Navy’s marine commandos have been asked to be deployed in Eastern Ladakh where the Indian Army is facing the Chinese troops especially at Gogra-Hot Springs and both banks of Pangong Tso lake. The MARCOS will be deployed with the Indian Special Forces to gain experience in polar desert conditions with high wind chill factor and heavy snow.
According to sources, the deployed troops are waiting for last shipment of polar winter clothing and face masks, which are expected to arrive from US Army own reserve stocks by the first week of November.
Asserting that the Indian Army is prepared for a long haul, sources pointed out that the PLA has already deployed strategic jammers in Arunachal Pradesh and is going in for a massive infrastructure and storage capacity upgrade in both Xinjiang and Tibet.
In lieu of this, the Indian Navy has been asked to focus on Andaman and Nicobar Island to monitor Chinese warship activity in Indian Ocean rather than get concerned about PLA Navy deployments off the coast of Africa. Indian Island territories of Lakshadweep and ANC are the key to national maritime security as they dominate the most important shipping lanes – from Persian Gulf to Malacca Straits-in the world.
The Indian Army, according to sources, has been preparing for long stay in the Eastern Ladakh for which necessary stocks are being dumped at strategic locations for winter months. Apart from the Army, the Indian Air Force (IAF) is also braced up to meet with any eventuality in the Eastern Ladakh or other sectors.
It may be mentioned here that India and Pakistan have held several rounds of diplomatic as well as military-level talks to defuse stand-off along the Line of Actual Control (LAC) in Eastern Ladakh but there has been no headway in defusing the crisis.