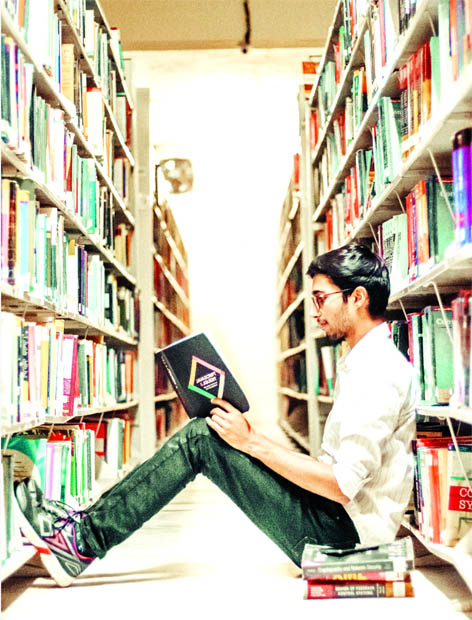 When the question to attain vidya by a student arises then the student must attain the following preach of Vidur Neeti shloka 8/6 in his life-
“The student if is desirous of experiencing worldly merriment then he should leave vidya [study] otherwise he who is desirous of attaining Vidya, he never thinks about experiencing worldly merriment etc”.
Therefore, Vidur Neeti concludes that the student who is desirous of worldly merriment should leave vidya (study) and he who is desirous of attaining vidya, he should leave worldly merriment etc.
The meaning of Hindi word- Vidya is the voice/speech which gives knowledge. The aspirant who ardently desires to gain knowledge is called Vidyarthi-Student.
Regarding obtaining of traditional knowledge (Vidya) we will have to pay our attention towards previous vedic yugas, where Brahma (learned of four Vedas) used to preach different types of moral duties and spiritual knowledge from Vedas in a Yajyen. Such preach is called Vidya. (Rigved mantra 10/71/11 refers).
Vidya i.e. Divine knowledge gives salvation, if we follow it.
When we attain worldly knowledge, by which materialistic articles are obtained/gathered and also other matters are obtained to live upon only, it is called Avidya. Please note that in present times, only avidya is being preached everywhere and hence problem. A deep study of Vedas reveals that both vidya and avidya are necessary for human-life.
That is why, Yajurved mantra 40/14 states that a person who knows and follows vidya, he realizes God and when he also knows and follows avidya, he overcomes the fear of death. Therefore, Vidya and Avidya are required to be known and progressed simultaneously, being the main motto of human life.
Nowadays, mostly the students are told that education is the means to earn money to live upon, the present education being one-sided i.e. related to said worldly matters only.
In the absence of proper arrangement of Government ( as was provided by Kings in ancient times) if one-sided progress , either in spiritualism or in worldly matters is attained by the students then surely illusion would generate in the students as well as public and Government. And student being the invaluable treasure of the country would be effected by illusion and consequently violence, corruption, dishonour to women, malnutrition and several other problems would emerge in the country. (Atharvaved mantra 11/3 (1)/31-33 refers).
So, necessary amendment in education system connecting it to traditional education is the need of present time.
In view of the above facts, four Vedas and the Vedic literature preach the boys and girls to concentrate on studies for whole of life while discharging all moral duties. The students must always keep themselves away from all kinds of violence, riots and other controversies.
Manusmriti shloka 1/108 preaches that the knowledge mentioned in Vedas and Smritis (i.e. religious books based on Vedas, written by Rishi-Munis) and holding the same in life is the best authentic moral righteousness. And therefore the thoughts/deeds done against the vedas and smritis are totally sinful acts. As was facilitated by Kings in the previous yugas, our Government should also make necessary arrangements to include listening of Vedas in present educational system so that the said eternal tradition of listening to Vedas is continued.
Nowadays when we eulogise the true stories of Sri Ram, Sri Krishna Maharaj, King Janak, King Harishchandra, Dashrath and their public then usually we forget that such pious dignitaries got the eternal knowledge of Vedas from ancient Rishis traditionally. The said pious dignitaries proved that to get such Vedic knowledge and adopt it’s preach in daily life is the main motto of human-life. So, it is regretful that India has broken the tradition of listening and attaining vedic knowledge by students from a learned Acharya.
In this regard, see what Rigved mantra 8/100/12 preaches here that assume that soul is telling to his body that Oh! friend, we must destroy sorrows and obstacles which come in life by getting vedic knowledge and science/philosophy and thus obtain salvation.
It is sad that the present educational system is totally against the ancient gurukul educational system. The present educational system is mostly deficient of code of ethics in respect of students and you know, the person who misconducts in life, he can not be purified by Vedas even. So, Government should pay utmost attention to generate vedic values and morality in all students and fulfil their reasonable demands to make the nation strong.
Students are priceless gems to lead the country to get progress. Therefore, virtuous conduct, moral duties, ethical behaviour, good character with control over senses, kindness, nationality and religious thoughts etc. are some of the good qualities which are required to be generated within each and every Indian student and the duty of generating such qualities within student, rests on parents and the Government.