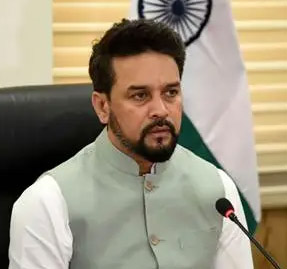 NEW DELHI, Sept 20:
Senior BJP leader Anurag Thakur has said the party’s outreach in Lok Sabha seats held by the “real” Shiv Sena led by Chief Minister Eknath Shinde would only strengthen the ruling alliance in Maharashtra ahead of the Lok Sabha elections in 2024.
Thakur’s remarks came days after he visited Lok Sabha constituencies of Kalyan and Mumbai South Central, held by members of Eknath Shinde-led Sena faction Shrikant Shinde and Rahul Shewale respectively, giving the new alliance partner some anxious moments about their future in the general election.
Shrikant, a two-term member from Kalyan Parliamentary seat, is the son of the Maharashtra chief minister, while Shewale is the leader of the Shiv Sena in Lok Sabha.
Eknath Shinde led a rebellion within the Shiv Sena in June, claiming the support of more than 40 of the party’s 55 MLAs in Maharashtra, to become the chief minister with the support of the BJP. The then chief minister Uddhav Thackeray, who led the coalition Government of Shiv Sena-NCP-Congress, resigned from the post in the face of the large-scale rebellion.
Thakur’s visit to the two Lok Sabha seats in Maharashtra was part of the BJP’s plan to strengthen the organisation in 144 Parliamentary seats it lost in the 2019 elections.
Seeking to allay apprehensions in the Shinde camp, Thakur said he would focus on strengthening the BJP in the respective constituencies and ensuring timely implementation of central schemes.
“A strong BJP will benefit the alliance. We will also remove shortcomings if any. We are working to ensure that we recover the lost ground in the one-and-a-half years left for elections,” Thakur, the Union Minister for Information and Broadcasting and Youth Affairs and Sports, told reporters.
He said several central schemes such as building toilets, developing sports infrastructure and other aspects of the smart city project were not given due attention during the Thackeray Government. BJP had contested the 2019 Lok Sabha elections in alliance with the Shiv Sena and won 23 out of the 25 seats where it had fielded candidates. Shiv Sena, which had contested 23 seats, managed to win 18 seats. (PTI)
After the rebellion in the Shiv Sena ranks, 12 of the 18 Lok Sabha members from Maharashtra had shifted allegiance to Shinde. (PTI)