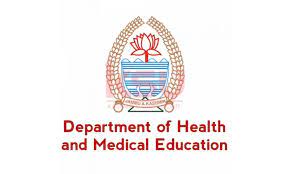 Chain of certain prevalent shortcomings in a department and that too of critical nature require to be addressed in totality by taking decisions and measures , the process of which we may call as streamlining. In fact, the process should not set in only after resorting to the conditions and circumstances reminiscent of the proverbial digging the well when the fire was raging but should be on a persistent and continuous basis. That may require even introducing of some reforms in the system even though some may take a dislike of reforms or the changes in the first instance. Health and Medical Education Department in the UT of Jammu and Kashmir, as the name in itself suggests , looks into the most important assignment that of providing medical treatment to the needy across the UT and believed to be doing it uniformly in urban and rural areas besides promoting medical education. In fact, how the COVID virus pandemic was effectively managed by the medical personnel of all hues is beyond any conjectures or doubts but the department is reeling under an internal administrative system that clamours for change and revamping too, is beyond any doubt. If certain measures to set it right even belatedly are proposed to be taken , the same need to be appreciated and implemented without any reservations or delays. Why should not it be made mandatory for every Doctor and other medical staff to serve a rural and a semi urban area for at least three years so that a fair dispersal of medical treatment, attention and associated facilities are made available at these areas about which we have, many a time, written about and suggested the practice to be implemented . If now this procedure is sought to be introduced in all the hospitals and medical institutions under the control of the H&MED , the same needs to be implemented and no proxy postings shown by certain influential medical personnel by arranging “on deputation” attachment with a city hospital should take place or encouraged unless warranted by exigencies only. In the same way, the practice of exerting pressure and influence of political leaders on the medical administration to effect transfers of Doctors and other staff as per their preference and choice of place should otherwise invoke the provisions of service conduct rules and disciplinary norms but the fact is despite this provision being there coupled with the instructions of the General Administration Department , transfers under pressure and influence do take place. Not only those concerned who seek transfers like this but even those helming the administration succumbing to such political pressure is unfortunate . Political leaders cannot , generally speaking , show not feeling inclined to interfere in the administrative policies of transfers and service related issues including those pertaining to disciplinary proceedings but such recommendations should not be given credence . That precisely requires administrative courage and will. Should this practice, therefore, not be stopped and if on this front too, which cannot be underestimated , certain fresh instructions are issued , they need to be implemented. On the other hand, why is there not a sound and tangible Transfer policy in vogue or one separately stitched for the H&ME Department, is the moot question. Marking attendance by using bio-metric system needs hardly any emphasis to be laid on and against the popular perception that the system must be working smoothly in all departments of the UT and if even in this area there are gross inadequacies and bypassing approach adopted by the bulk of personnel working in the department of H&ME in Jammu and Kashmir, that was quite unfortunate and must be contained and procedure enforced without any fail. The problems and issues of the entire medical personnel should , on the other hand, have a matching redressing grievances mechanism especially in respect of the grudge against no rationalising of working hours, over -work during peak hours and even beyond , across the UT. Shortage of Doctors and nursing staff often lead to overwork and pressure from the patients which needs equally to be looked into and resolved. Revamping and reforming the system is quite necessary which brings all out changes resulting in increased cost efficiency, improved productivity, better time management, improved understanding and communication and minimising risks and maximising greater transparency. Health and medical related issues need to be accorded priority . However, which areas to streamline on priority must also be duly identified . What are the outcomes of the proposed streamlining measures must be analysed and feedback obtained to give enough scope for further improvement