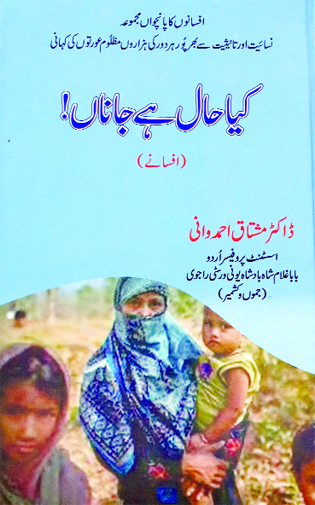 “Kya Haal Hae Janaa” is a fifth
collection of short stories based on feminism and oppression inflicted to women in all times of history. This collection is authored by Dr. Mushtaq Ahmed Wani, an internationally renowned fiction writer and literary critic of Urdu literature and
published by Educational Publishing House, New Delhi

Dr. Wani, presently employed as Assistant Professor in Department of Urdu at Baba Ghulam Shah Badshah University Rajouri has authored many books on criticism, research and short stories including Aaiena dâr Aaiena, Aaetbaar-o-Mieyaar, Shaoor-e-Baseerat, Tarseel-o-Tafheem, Qabar Mei Zinda Aadmi, Meetha Zehr, Hazaru Gum, Aner Ki Batei etc.
The collection under reference here i.e. Kya Haal hae Janaa includes twelve short stories at all. These are Yahaan aur Wahaan, Mein Hoshyaarpuri hun, Mera Kaam Terae Naam, Samaaj, Bund Aankhoon ki Aazmat, Tanzeel Tamanna, Gashi, Aasaar-e-Qayamat, Draaeni Aawazein, Anokha Rishta, Rate List and title story Kya Haal hae Janaan. In this title short story, as elucidated by Prof. Shareef Ahmed Qureshi in his essay ” Dr. Mushtaq Ahmed Wani kay Afsanwi Imtyazaat”, Dr. Wani has very well highlighted the oppression made out to women in our society.
The author has highlighted the wretched condition of women belonging to high and middle class families and had minutely researched on their weaknesses, deprivations, desires and regret. The author’s publication “Urdu Adab mein Taneesyat” for his D.Litt. thesis is very well appreciated among feminist writers as he has very minutely elaborated on violation of women rights.
Let me now refer the title short story of his latest collection i.e. Kya Haal Hae Janaa. There are two main characters in the story i.e. Jaan Bibi or Janaa and Aashiq Jameel who got entangled in love and married later on without consent of parents. Ashiq was a young handsome middle school teacher and Janaan was a Field Officer in Social Welfare Department. Both were attracted to each other and spent the initial years of marriage happily like many lovers. Janaan gave then birth to two daughters but Ashiq was in favour of baby boy. Doing so she bore third daughter after which Ashiq was not happy and nobody came to wish or greet her. Ashiq took side from her wife and indulged in drugs. He also got now promoted as Administrative Officer and gradually he became proud and made a distance from his wife. One day, he was intoxicated with alcohol and entered the kitchen and asked his wife, ” Kya Haal hae Janaan, today u seem to be my sister”. She was infuriated with this rubbish slang and got hold of his neck and there was duel between the two. Later on, he divorced her leaving her on the mercy of God with three minor daughters to raise them on her own. She got distressed by this act but she made a firm decision to live with her daughters and get them educated in best way for their future .
Their indifferences also came to fore when we go through one of their conversations during outing in a distant and lonely place. They saw a peacock dancing there but suddenly when he looked down on his black feet he wept. Janaan said to her husband, look the peacock is weeping and peahen is wiping his tears and how good the peahen is. But Ashiq said it is the peacock who is very soft hearted.
Then they saw a fish in water who is taken out by Janaan but it gets slipped from her hands. On this her husband tells her that woman and fish are alike as both have same nature and cannot stay at one place. In both instances, he shows the masculinity on higher side and femininity on lower one which undermines her anyways. Janaan says that she came to a conclusion that no matter how much does a woman touch the sky she is ever seen as a fish taken out from water by a fisherman and at last it dies. The end of this story is very shocking and frightening as it makes the fortune of women as hell.
There are many morals of the story as given below:
Firstly love marriage without approval of parents does not last long and cost is to be borne by the woman herself because of her hurry in recognising her partner without experience. Its the woman who has to suffer in future. So women should think enough before taking any major step in their life lest their foolishness and softness will make their life hell.
Then when Janaan bore three daughters she was seen with hatred by the husband and family and acquaintances. Here birth of daughter is seen as bad omen in society whereas baby boy is welcomed by all. So the story depicts the narrow mindedness towards girls and women which needs reforms at societal level.
Also one more trait of women is seen in Janaan when she stands firm after divorce to raise her all three daughters on her own and without any support from family. This shows inner strength of women which must be shown by the fairer sex when needed in life.
Religious touch has also been given to the story by the writer. He says when Ashiq crossed all limits with his wife then before the onset of holy month of Ramadan, she asks him to keep fast and offer nimaz, pay zakaat and be ready for pilgrimage to Mecca.
So many themes and morals come to fore when the story is analyzed. In other short stories of same collection there has been the main depiction of women and oppression and cruelty being done on them by male bastion in the society. There is feminism and feministic approach seen in Kya Haal Hae Janaan.